Feargal and Scarlett landed in Silver City New Mexico around about April 23rd.....they had so much to do...including going to Tucson, Arizona on a mercy mission that they only just left on May 28th...bound for who knows where.....all I can tell you is that it's north!!
Oh my the pair of them had such a good time...from the very first hug with Donnacha.
Feargal and Donnacha had set off south down Broadway in Silver City. They admired the old-fashioned Victorian Era street lamps, and laughed about the very uneven sidewalks and the very high curbs. They were glad for the ramps that someone had made just for their visit!
Miss Scarlet, however, had a surprise spa day as a treat (and a retreat from playful Leps) and Feargal and Donnacha headed downtown. . . .South on Broadway at a brisk pace towards Silver City's Authentic 1800's Buffalo Bar! Which of course, is no place for a lady; even one in a red dress.
The boys had intended to check out the Buffalo Bar, a place of renown (some good, some not as good) and local hangout for Bikers, Hippies and Cowboys. But they were just a few steps away from Curl Up and Dye when they began to be intrigued by the art in the windows of the galleries.
Oh my, there was so much to be seen as they darted in and out of each Gallery on Broadway and they ended up on Texas Street. Their feet were beginning to be a bit weary, so they stopped in at the next Gallery.
Oh boy the stuff they saw in ANIMAS  was an eye opener for Feargal...I am surprised that he didn't have nightmares. 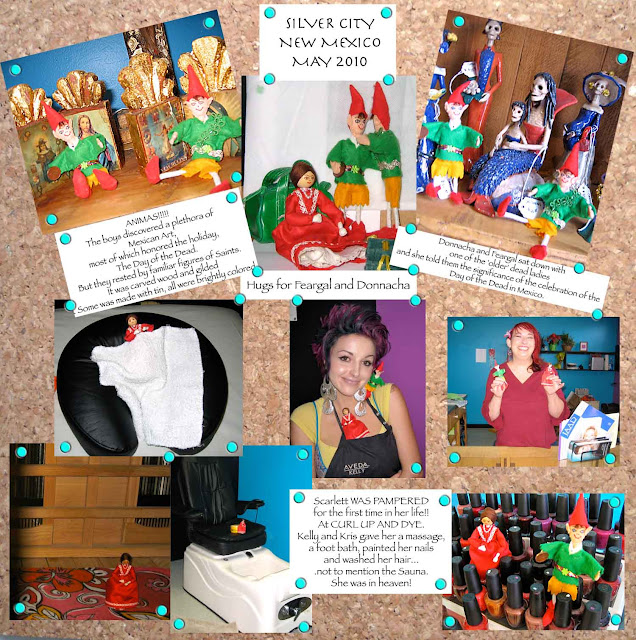 All too soon they headed off to Tucson Arizona, where they were much needed when Donnacha's 'Dad' had an 'op'.
They made themselves useful looking after Mom between hospital visits and making her laugh! 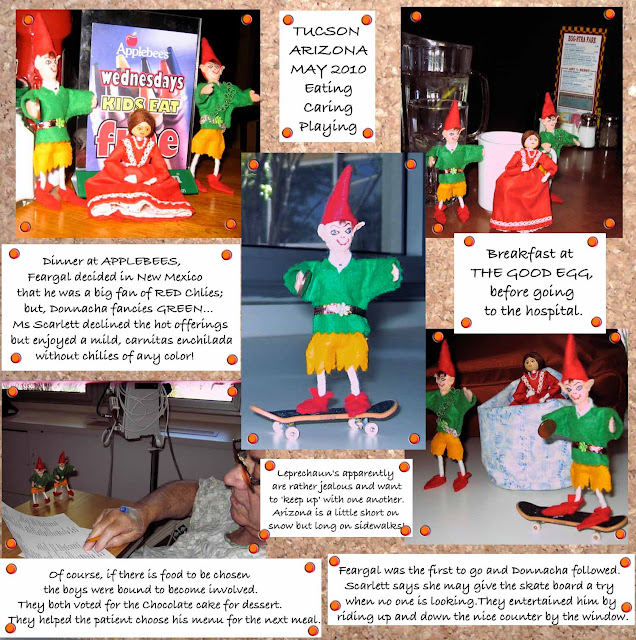 Feargal was gobsmacked when Donnacha got a present of a skateboard. Both boys had been green with envy when they had seen Blathnaid on her snowboard. 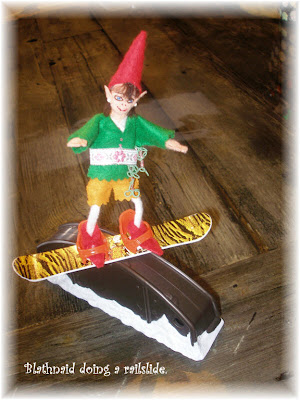 Feargal was insistent that he might have some sort of a board and could do as well as his Idaho cousin's snowboard! Leprechaun's apparently are rather jealous and want to 'keep up' with one another.
The good news is that Donnacha decided to give him the skateboard....aren't Leps wonderful!
When 'Dad' was well enough to go home, they all went back to Silver City and life on the ridge.
I wonder where they are headed, and wish them a safe landing.
Posted by Tatskool at 1:55 pm