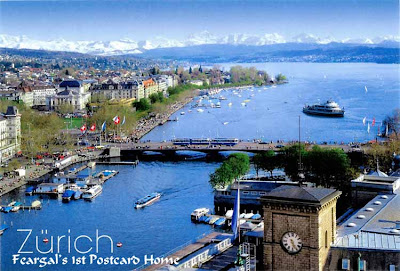 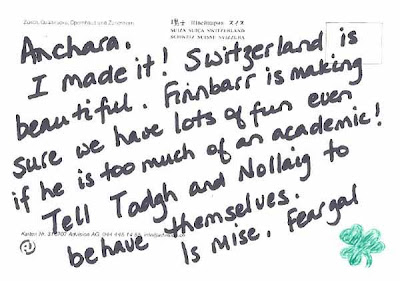 Before I got the card, I had been sent lots of reports and photos.
the first message that I got said
" Finnbarr and Feargal have disappeared. They said something about mates in Zurich and not waiting up ... At least the rain has stopped so they won't get wet!" 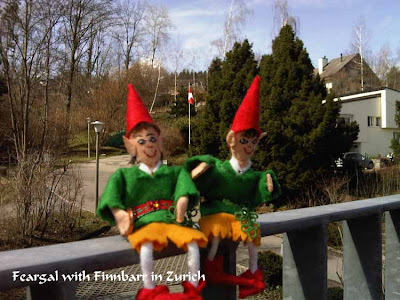 "The photo of them on the terrace was taken after 1pm - the first I saw either of them all morning. I have no idea what time they staggered in last night!" she said.
That's Finnbarr on the left...I don't think that you have seen him before.
He is reported to be taller than Feargal and with a lot more hair!! They thought that maybe he was Feargal's older brother...but no it's just that kids are getting taller and taller aren't they....he must have eaten better!!
It rained a lot during Feargal's stay so they didn't get to go out much.
Finnbarr made Feargal feel at home and offered to give him a suitcase.....he says that it opens on both sides so can hold tatting!! (he should be so lucky!!)and has a game inside. Feargal was delighted as he had only taken a small bag with him. 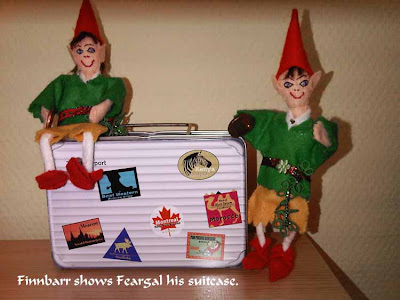 Is that cute or what!
Finnbarr is also insisting that Feargal take a Swiss Cowbell with him.....Finnbarr can hardly lift it!
Cute isn't it?
Finnbarr is also reported to be insisting on something else but i think not!
More about that later! 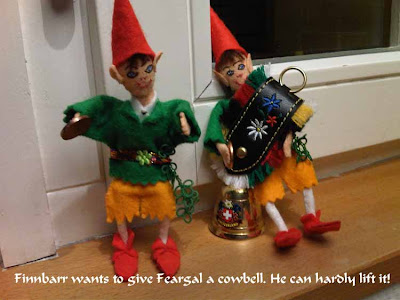 They went out on the town several nights and were pretty miffed when the clocks went forward and they lost an hour.
Here Scarlett has been hearing all about it and came to a decision to fly out and supervise/chaperone Feargal's activities....Feargal is NOT pleased.
The excuse that she gave was that she had forgotten to give Feargal the addresses of his hosts.....so being the good NPDA that she is she put each one in a sealed envelope and like Mary Poppins put them into her bag...and flew off!!
Feargal left Zurich on tuedsay for his next stop...this time he was accompanied by his hosts and Finnbarr so the two of them shared a seat on the flight.
Finnbarr and Feargal should have a ball in********* as neither have been there before. Scarlett hopes to meet them there.
"Finnbarr told Feargal about Scarlett meeting them in ******** and Feargal is now pouting. Much as he'd love for her to join him on his travels his intention was to sow some wild oats. He's not sure he can with Scarlett along for the ride!  If you ask me, this sounds more like something Finnbarr would say, not Feargal. The corrupting influence has begun". She told me.
Posted by Tatskool at 11:48 am