So last weekend...a whole week ago now, I finally got to meet one of my tatting heroes!!
(I know she will protest about that).
And
it was just what I needed.....a poke in the ribs to get back blogging again.

It's not as if I have been doing anything different, been tatting up a storm, working on my TAT Artisan, been teaching, been dyeing, been traveling and been getting older!

OK get to the point Tatskool !
Who did I meet.....well if you read her blog you will already know!
It's Jane Eborall...yeah!
Jane was just about the first person that I ever communicated with when I discovered that tatting was alive and well and on the internet!
I remember that she replied and asked me to send a photo so that she could see who she was talking to!
In the last 10 years at least, emails have zoomed backwards and forwards between us, often many times in an evening when we were both on line sitting back relaxing....she will say relaxing what's that??? You see I know her pretty well.
But we had never met even tho' she is the nearest REALLY FAMOUS  tatter to me!

The last couple of weeks have been really special as I had a big birthday to celebrate....
My little grandson is 4 and a pillar of wisdom.
earlier in the year he started pre school at a super new Steiner School.
His mum was walking behind him as he chatted to another boy...
'How old are you' he said,
'3 was the reply...but I'm nearly 4!'
to which grandson said..
'you must enjoy being 3,you'll never be 3 again!!'

And so following his advice I determined to enjoy being ****** as
I'll never be ****** again.
Thus I set forth to party for all I was worth, to eat drink and be merry in a 5* Hotel in the Lake District (canapes in the music room and all). Steer a canal boat down the Leeds to Liverpool Canal.... 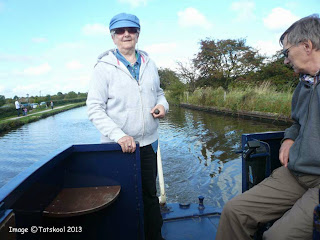 .......birthday cake in the open air...the breeze blew out my candles! 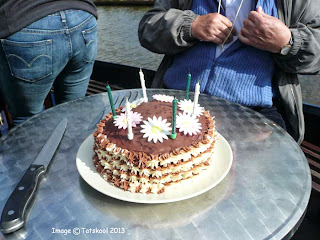 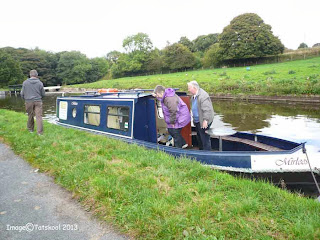 ....walk to Frederick's Ice Cream Palour to choose from 58 flavours and endless shapes of cone,and eat the biggest Ice Cream I ever saw. 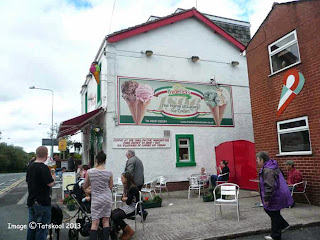 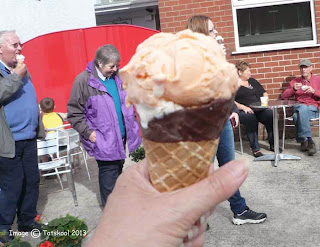 Luckily our Narrowboat was still where we left it!! 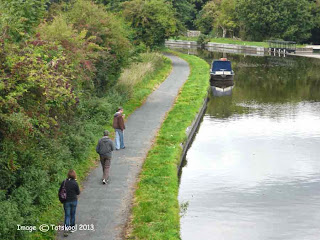 ........ Later to meet with family that I hadn't seen for years.
Especially good was getting together with a cousin who is just two weeks older that me...got to drink his champagne and eat his cake! and with two great friends whose birthdays are just after mine.
Jane was one of the latter so I finally pinned her down and she met me.

As we waited for her....hubby was concerned...'how will she know you'...
'she'll know me alright'...wasn't I wearing tatting after all!

Saturday evening in a pub in Stratford on Avon we were talking tatting...yeah!
I gave her a pendant that I had tatted (much more about that coming later).
I had asked her to bring some tatting and she produced a bag which she tipped put onto the table of the most stunning brooches in a multitude of colours.and asked me to choose one. Hardest decision ever.....and I seemed to be drawn to one of my favourite colours...blue. 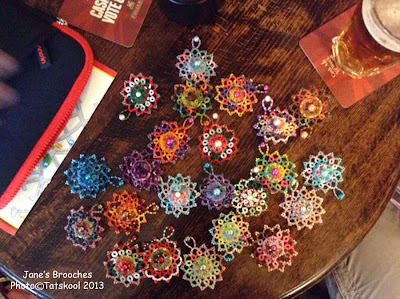 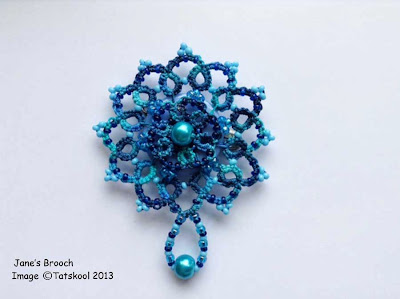 Here we are. a couple of happy internet mates.... 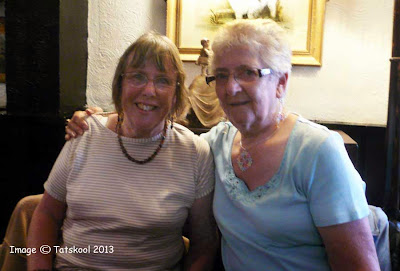 Jane suggested that if we didn't have to leave TOOOO early in the morning, she would give us the 'alternative' Stratford On Avon....Shakespeare Tour.
YES PLEASE.......more about that soon.....