It was becoming increasingly obvious that we weren't going to see all the Rhinos in Chester,
there are 62 of them scattered around the city and it was getting near to train time.
I addition to the large Rhinos, 116 miniature Rhinos...about a quarter of the size of the big ones, were distributed to Schools all over Cheshire West and Chester.
These were to be seen in shop windows....I wouldn't even begin to show these to you!
Onwards on our trail, 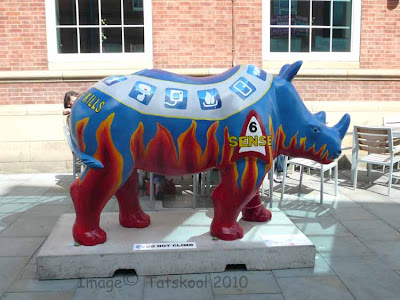 Safety Sally
This Rhino is from the Cheshire Fire and Rescue Service, the design resulting from a competition at Christleton High School.
Apparently she will be sending Bluetooth safety messages to all who come to see her. 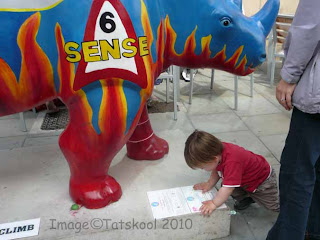 Grandbaby was keen to learn all about the 6th Sense Campaign!
The final Rhino that we saw in the City was.... 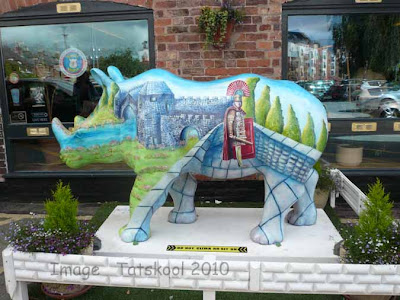 Guardian
he protects the walled city of Chester.....but who is going to protect him???
We all hope that he will not become a part of history.
My own little team of Rhinos has been joined by...... 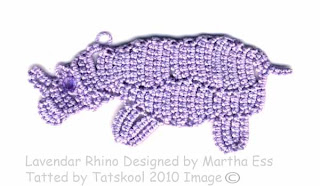 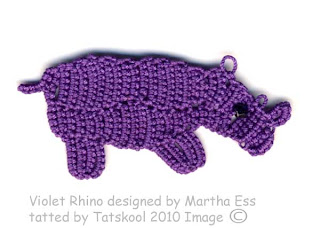 .....Violet.....
both tatted in size 10 Flora....I think this a great size for the block tat animals. the have faceted crystal eyes that sparkle.
Violet and Lavendar are great friends and like to make the other happy.

More tomorrow as we hunt for more Rhinos.
Posted by Tatskool at 6:39 pm