I was very touched by the response to my post renaming Flame Lantana for Gina.
Something that I always intended to do.
Thank you so much, I think she would like it.
It was interesting how many of you had never seen a Tequila Sunrise up close....me included
so I looked it up.
Here is a link to a recipe,
The photo is gorgeous 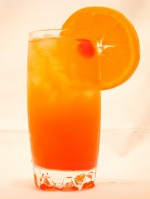 It's normally made in a tall glass but Wikepedia shows it in a highball glass,
photo by Evan Swigart. 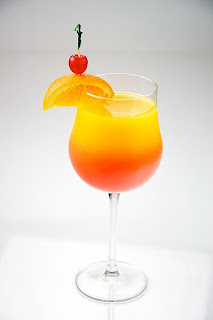 Wow aren't they stunning!
I never thought it would look that good!
The tequila is mixed with orange juice over ice and the trick is to pour the Grenadine syrup down the inside of the glass so that it sinks to the bottom without mixing, poring over a spoon is said to help.
Wow must go and see if we have any Grenadine syrup left....dates back to our Pacific island days, I remember hating the stuff but the kids loved it. maybe I should change my mind!
Well done Gina, you were spot on.
I forgot to put in the link to my original post about Flame Lantana, here it is ....
Just read Gina's comment on that post, before she had the actual thread in her hands...
Makes me think of fireworks! I like lantana too, we just don't have much of it around here so it wouldn't be my 1st thought. I like bright colors.
So now I know that she did like bright colours.
I got as far as testing a skein today to see if the colours are right.
Dont hold your breath this is a slow, slow process.
If you have any questions about this thread please email me.
Please know that this is just my memory of Gina.
Posted by Tatskool at 7:25 pm 9 comments:

There has been a lot of suggestions that it would be good to dye a thread in honour of Gina.
I wish I could mix a brew that would remind me of Gina every time I looked at it

So what was essence of Gina to me?
Life wasn't always easy for her and often she got a raw deal.
But she seemed to pick herself up and just get on with it.
Her blog was always so interesting to read, she ha a natural gift for communication.
Her metaphysical blog showed the much more thoughtful, unsure side of her.
But to me she was a ray of sunshine when she landed in my inbox. there was always something to make me smile. she ended all her emails with a smile
:-) Gina
Sometimes it would be a funny story or picture or a beautiful Powerpoint presentation of photos and music and sometimes it was just to chat.
Can I distill my essence of Gina?
Well I think I already have!
Way back in 2010 I sent Gina a sample of my new thread Flame Lantana.
The second thread in my Rainbow Transitions series.
she broke her blogging sabbatical to write a post.
This is what she said-:
I got a Lantana sample from Tatskool and I think it's misnamed
I think it looks like a tequila sunrise!
watch the video clip of 'Tequila makes her clothes fall off!'
it will make you smile too.
So....uh...be careful when you tat with this thread. she said!
She obviously knew far too much about Tequila Sunrise and what it can do!!
I must admit  that I have never seen a Tequila Sunrise before, she is spot on with the colour.
This is what she got 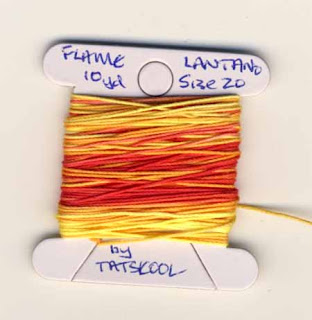 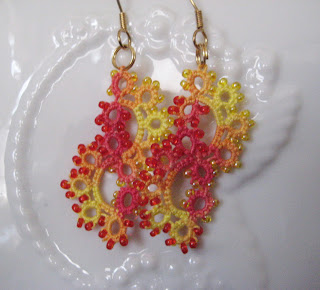 .......this is what she tatted.......
and
.........and this is what she said....
"I was VERY surprised at the way it tatted up.  On the card, the colors look so bright and you miss that gradual change in shades. As I moved on to the 2nd half of the first earring and saw how the colors played out, it really did remind me of that drink, tequila sunrise, how it's all different layers and then you stir it and it's so pretty as the colors blend.  I wondered also if the 2nd earring would follow the same course so that they matched or if it would be off a bit but they match".
Don't you just love it when a length of thread tats up relatively symmetrically without having to engineer it!
Tequila Sunrise is such a beautiful name...I wish I had thought of it.
I fact I had planned to change the name when I dyed another batch.
You can read about why I called it Flame Lantana here and see what I tatted with it.
So today I got up off my backside and went into the dye studio for the first time in so many months and mixed up some dyes for......
GINA'S TEQUILA SUNRISE
My essence of Gina.

Gina I see you tatting with the angels brewing up one heck of a sunrise for us all.
I will never forget you.
Posted by Tatskool at 7:49 pm 24 comments: 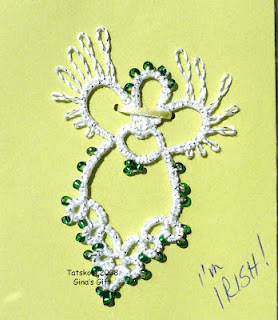 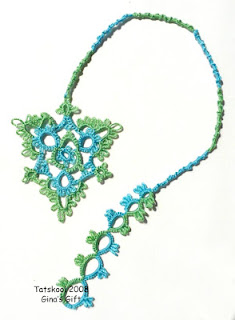 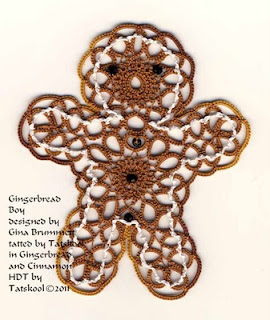