The seventh Snowflake from Jon Yusoff's book is Oasis.
First tatted in Rainbow Bright 20, it took approx 2 metres on Sh 1 and 5.5 metres on Sh 2...remember you may need more. 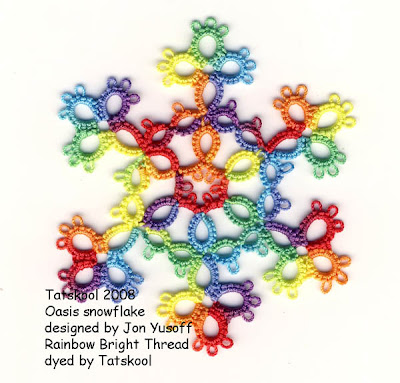 and then with the central section done in RB Green. This made a lovely contrast and would look nice in any RB Solid colour. 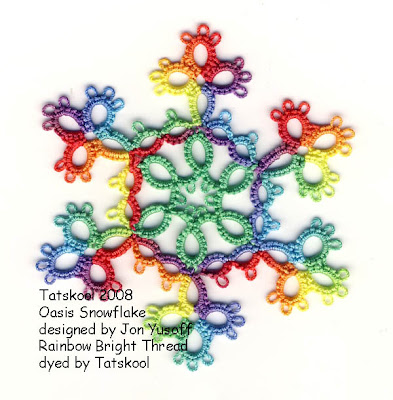 This is another very pretty design.
Posted by Tatskool at 6:27 pm 5 comments:

Remember the Leprechauns that I made last year and sent out to colonise the world.

I made 6 last November and they took up residence in England, Pennsylvania, Mississippi, New York and New Mexico as well as my own Fergal who stayed here to be in control!

Lots and lots of you claimed Irish Ancestry (well that covers almost everybody in the world!!) and longed for a Leprechaun of your own...ok maybe longed for is a slight exaggeration!!...and even those with no Irish blood in their veins wanted one too!!!

I was even asked if I would supply the pattern so that you could make your own...but really that wasn't even a runner as they wouldn't have been real Irish Leprechauns at all, at all!

Well I got out my gear and have made another 5 for this Christmas and they will shortly be winging their way overseas. Remember that I told you that Fergal was making a list...well he has been checking it to see who these guys should go to and he says to tell you that if you didn't make it to the top of the list this year well there is always next Christmas. Of course he isn't the one who has to make them!!!

At the moment they are all away at the LEP Academy doing their Lep reconnaissance training so they can do their job efficiently...I am not going to mention exactly what their job description is!!! but you will know!!
I just found out that LEP RECON training costs and arm and a leg outside of Ireland, I suppose it would, it's highly specialised.

Just a word of warning ...never trust a Leprechaun with vital tatting information!!!

OK here they are in Christmas mode wanting to wish everyone a Happy Christmas and sorry that their isn't one for everybody...oh doesn't that make them even more desirable!!! 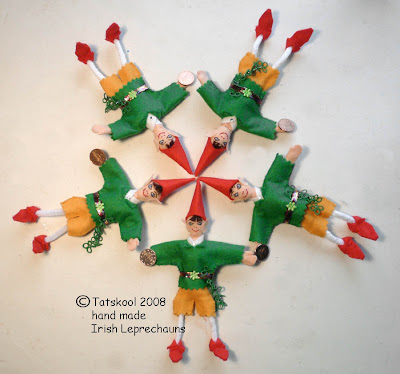 If you want to learn more about them just click on the leprechaun link in the sidebar.
Posted by Tatskool at 12:41 pm 13 comments:

No 6. Sunburst and more talented friends.

My next snowflake by Jon Yusoff is Sunburst.

First in white size 20 it measures 3 1/4in and takes in DMC 20 approx 3.25metres on Sh 1 and 5.5 metres on Sh2......do make sure that you allow extra as this is only a guideline amount that I need to use. Allow at least 50cms more on each shuttle to slacker tatting or longer picots. A guide line is only good if it makes things easier for you, if you have to add a short length near the end then it hasn't served it's purpose.

It's a very elegant pattern., one of my favorites, lots of negative space. 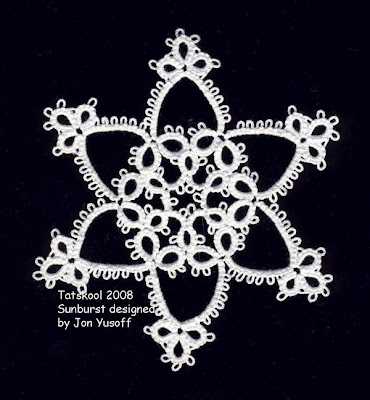 This is a design that really looks really good in Rainbow Bright. I think its because of the continuation of the colour round the outside that also includes the rings. I like the busy bit in the middle too. This would look nice using a solid colour too for some parts, but time eludes me. Maybe some other time. 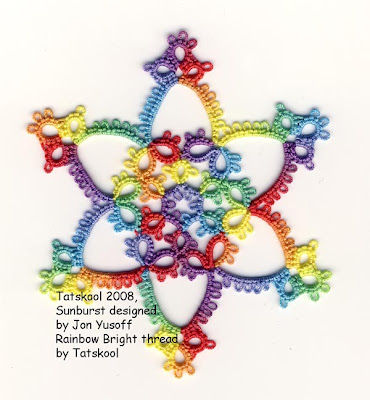 There have been lots of lovely things coming into my inbox from you guys out there using Rainbow Bright....they make my heart sing!

First from Jeff came Kim's Snowflake, it looks stunning on the black background. I have to try this one. Jeff definately deserves the One Sweet Blog Award(see my earlier post). 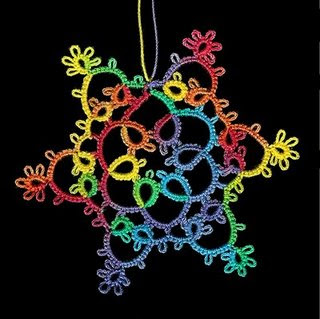 From Laura came a Denise Munoz Rose Snowflake, the same one that Sherry T tatted. 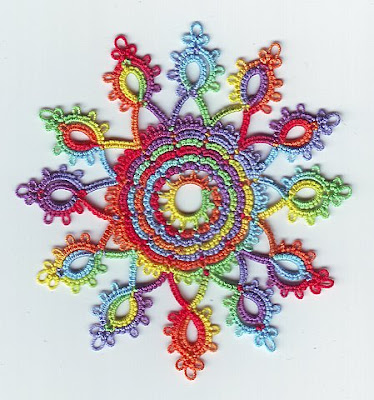 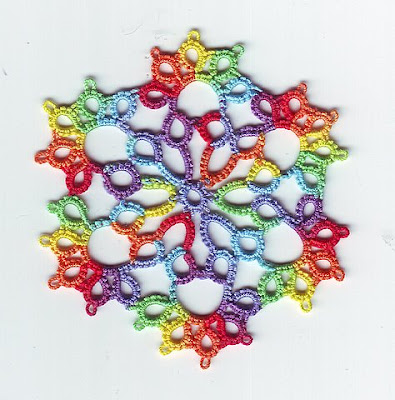 and her own design Pizzazz, 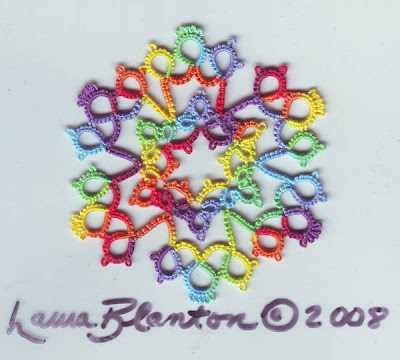 and Nancy Tracy's Layered Snowflake. Even more for my must do list. Aren't they all lovely. 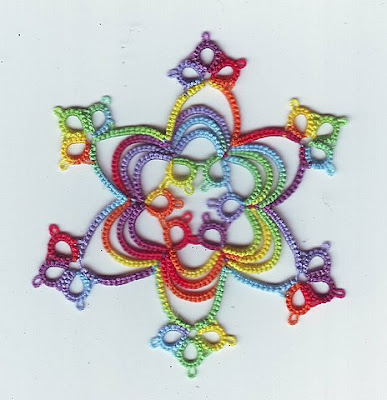 Omon San tatted a heart by Mary Konior, you also deserve a One Sweet Blog Award. 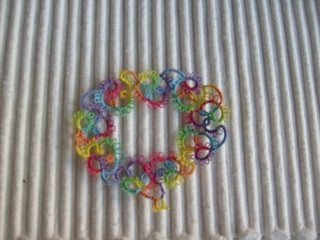 and Connie Angeline made Mary Konior's cross. I am not sure if you have a blog connie, if you do please accept a One Sweet Blog Award. 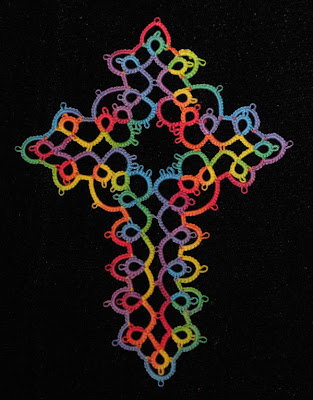 All I can say is wow, what talent you all have.

More snowflakes from me coming soon.
Posted by Tatskool at 10:08 pm 4 comments:

I am determined to work my way through all of Jon Yusoff's Tatted Snowflake Collection, All in Rainbow Bright, this is quite a challenge, especially to stick to the same thread, but it does give a great comparison, so I will stick with it and not be tempted!!

Number 5 is Milky Way...I have already shown you examples tatted by Laura and Jackie so now it is my turn.
The first one I made is totally Rainbow Bright size 20 and took approx 11 metres of thread. 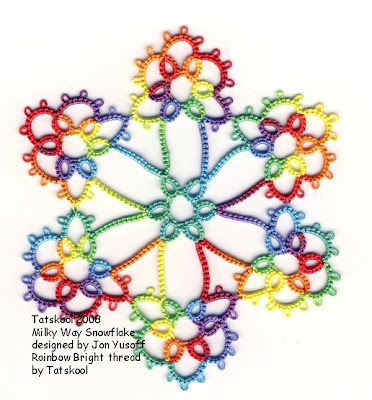 Next I used Blue from the Rainbow Solids for the rings. 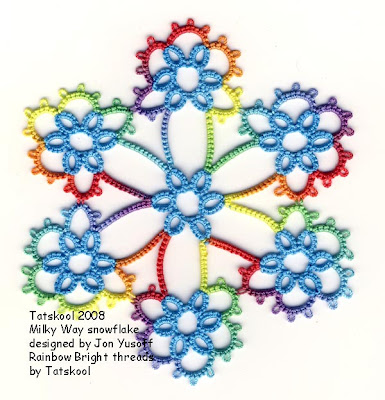 Then Indigo for the rings 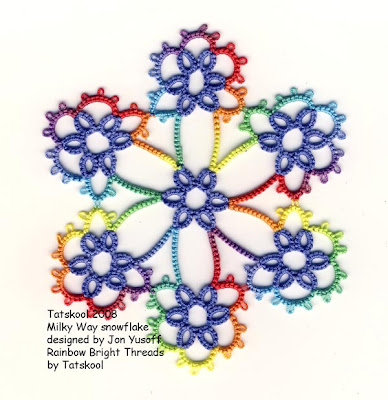 and finally the reverse, Indigo for the chains and Rainbow rings, giving quite a different look. I wonder which you like the best. 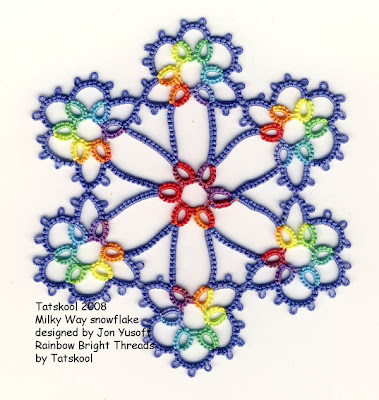 I like the way the inner rings all came out mainly red leaving the other colours for the outer groups of rings.
the ring shuttle took about 6 metres and the chains took about 5 metres.
Posted by Tatskool at 7:49 pm 10 comments: 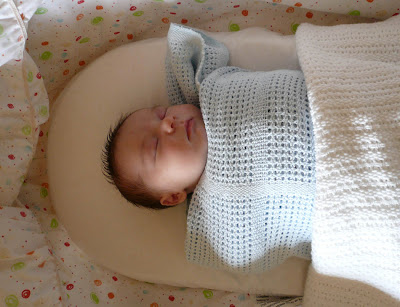 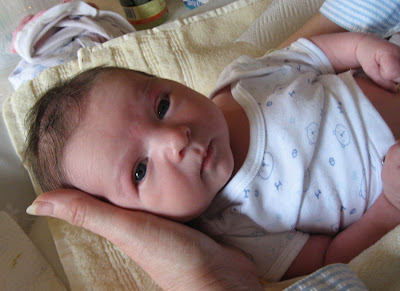 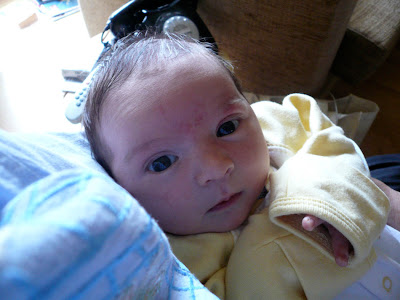 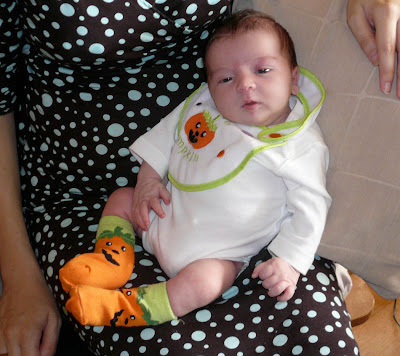 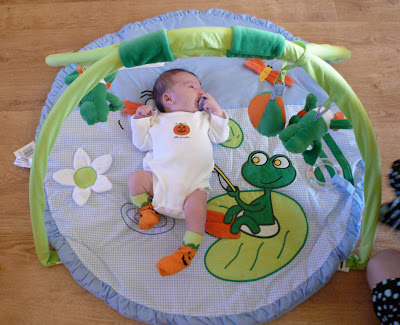 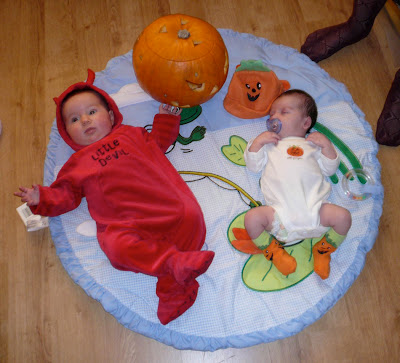 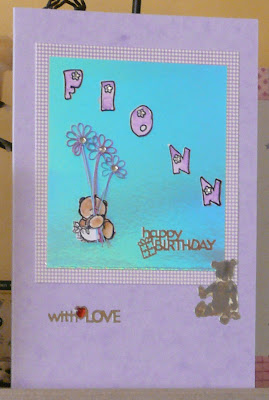 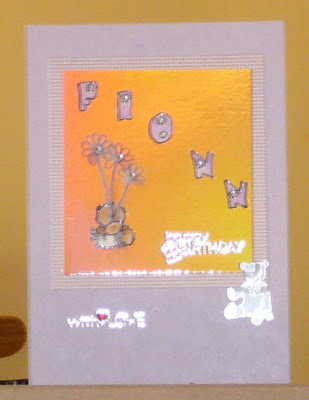