Now you have to go back a post, to Another Weekend of Geckos.in order to understand all this!!

After I ran out of thread for the grey leaf tail gecko I decided to start another one but this time it would be in WOW! colours. I was tired of using authentic gecko colours so this would be a Designer Gecko.

Never heard of a Designer Gecko...no I don't suppose you have! Well it's much the same as a new variety of Orchid or Rose that has been selected for it's beauty and rarity.

Occasionally a new variation will be appear in a gecko and the breeder will think ooooh! that's nice.......and so they try to breed more of them. This is often a very long drawn out process depending on whether the gene change responsible is dominant or recessive and may take several generations, until you can be sure that you can breed that variation on a regular basis. It's just a question of selection of the variants that you like. Leopard geckos are classic Designer Geckos.

Because that variant is rare then it will be sought after! and so it will be with my Designer Gecko!!

What thread did I chose....you guessed it none other than Rainbow Bright.

A Rainbow Gecko should be beautiful...or it maybe it will be a bit odd...which do you think it will be?????

Here is my first one started in Germany... 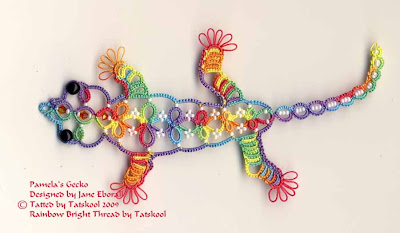 The beads are white opaque that I used for some of my other geckos, the eyes are black as I thought it needed a strong contrast....fire opal swarovski crystals in his head.....the toes are smaller than I normally make them....isn't it amazing tho' how all the toes are much the same orangey red colour!!

The fascinating thing about tatting a gecko in variegated thread is that you never know exactly what it will look like....I had wondered if every leg would be totally different. Of course now I wondered if the toes would be more or less similar if I made the toe picots bigger...mmmm 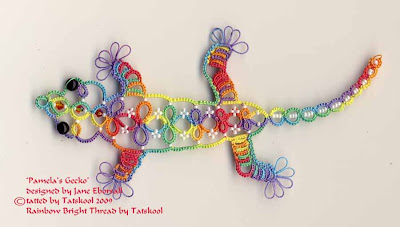 probably more similar.....but isn't he gecko so different...same beads....different effect when the outline of the body is in different colours.

Here are the two little fellas playing together. 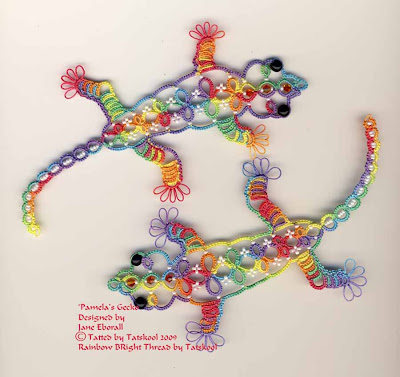 The next gecko just had to have my new leaf tail, hubby's favourite. 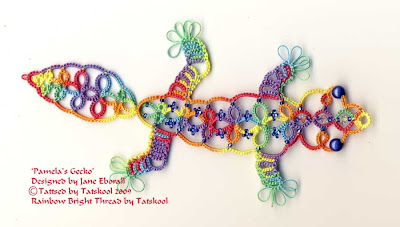 Doesn't he look different with his pale greeny/blue toes, deep blue silver lined sparkly beads, AB crystal swarovskis and his eyes....oh his eyes are beautiful, I can't describe them except to say that they catch the light in a different spot depending where you are looking from, making them look so realistic.

One more to go....tho' there is another half made too. 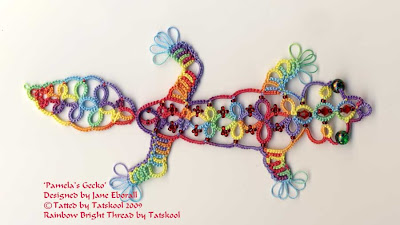 This one is probably my favourite, the toes are similar to the last one but the body outline is darker and the red beads and ruby red swarovskis give a really rich feel.
the eyes are fabulous, just one pair that I bought I don't know where, they are deep clear green with accents of red and gold. I finally decided to take both shuttle threads through the eye beads to avoid the thread running around the outside of the bead.

Here are the last two together..... 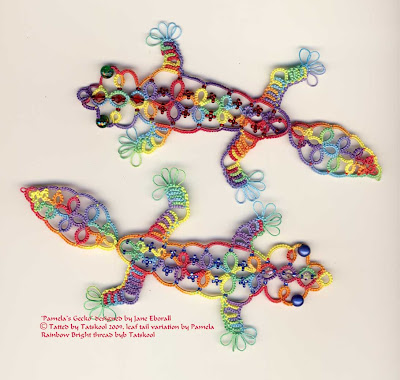 ...see how the light has caught the blue eyes in a different place.

Of all the geckos that I have tatted these rainbow ones just have to be my best ever. They may even be the best thing I have ever made!

You can't get any idea from these scans how gorgeous they really are.
Two of them are ear marked for my denim jacket but whether they will ever get there is another matter altogether...I hate sewing!

Must also show you one of the geckos my tat friends made a while ago.... 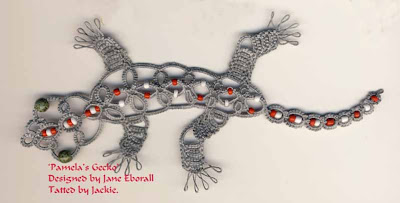 Sad to say that if my Rainbow Geckos were out in the wild they wouldn't last a minute before they had been spotted and eaten......that is unless they were on Rainbow Trees!!

Do please take the time to leave a comment if you enjoyed this post, they mean such a lot to me. So which do you like the best?????

Oh, and didn't Jane Eborall do a wonderful job when she designed this gecko for me.
Posted by Tatskool at 4:30 pm