Well I tatted that pesky irritating! little flea and now it's the turn of a genuine parasite. Parasites generally cause serious harm to the host rather than just being annoying and this one is no exception.

Martha Ess designed and tatted a nasty little parasite as a pair of fun earrings for a friend with whom she worked. I have been attracted to this pattern since I first saw it a good while ago. Mmmmm I though that name that sounds familiar! In the far distant past when I took my Zoology Degree we did a course on parasitism, so out came my 'Girls Book of Parasites'(doesnt everyone have one??),actually it's 'Introduction to Animal Parasitology' by J.D. Smyth. When I found it my first though was 'Aw my gawd I used to know all this!' well some of it anyway!

This is the drawing I found of this nasty little critter (Sorry but I have had to remove the name of the parasite from my blog as a huge number of my blog visitors don't come for to see tatting but have looked up this name and been directed to my blog as an information source!!). 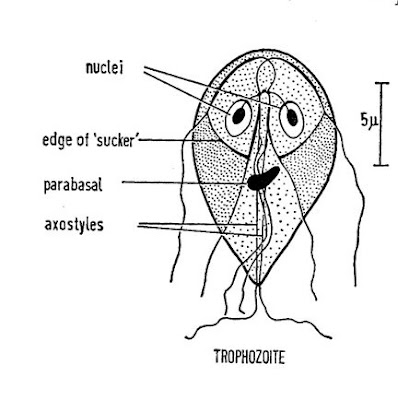 It is described as looking like a 'tennis racquet with out a handle' and has a somewhat comical face like appearance. It is a protozoan single celled animal that swims around using it's four pairs of flagellae. What seem to be eyes are in fact two nuclei. A parasite of man it lives in the duodenum and I think there we should draw a veil (a tatted one of course!)over it's lifestyle!!
Martha's design is the stage illustrated in the diagram, this is the active part of the life cycle rather than the cyst stage where it passes from host to host mainly through contaminated drinking water.

OK enough of the science stuff lets get to the tatting!!
Martha tatted hers in a pale green and I got to thinking what colour would a parasite of the gut be? First choice was a cheery bright apricot in size 10 flora, no point in telling you what this one measures!! 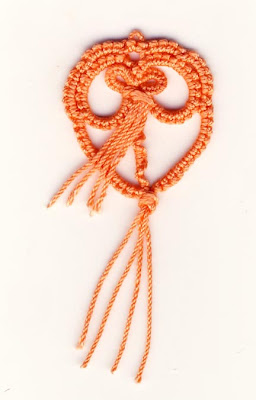 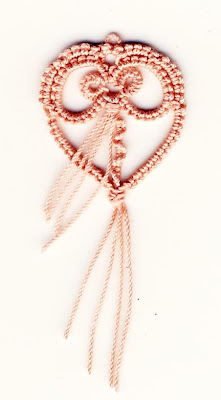 Putting it all together I think Martha made a cracking job of it,and this pattern is a little gem. Anyone else want to tat it. 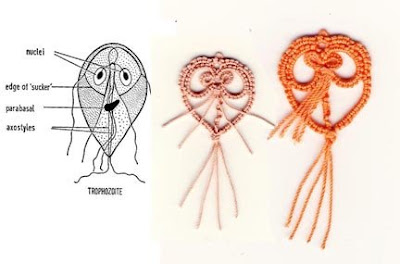