End of Summer! and No 32 Norwegian Minor Dragon

Oh my! today we have SUMMER...just when it's nearly too late...the sky is blue with those little fluffy white cloud things and the sun is shining...very brightly.

The house elf and I, we just hate it when the weather forecast man starts saying 'There is a touch of Autumn in the air', or 'Autumn chill'.
We shout at the television that we don't want to hear that word..especially in the middle of August!!

Heck we haven't even has Summer yet!!

We had almost given up on the Indian summers that we usually have in September...why did they have to leave it so late.

Season of mists and mellow fruit fullness sort of thing!

One of our favorite plants is flowering it's socks off outside on our deck. Does anybody out there know what this is......It's OK I do know as the house elf is a plantsman and it's his! There is a skein of my latest HDT for the first person to leave a comment with it's name...sorry but Latin name only, common names don't travel well internationaly and it may have many common names from different countries..
It almost left flowering too late and got it's head blown off. 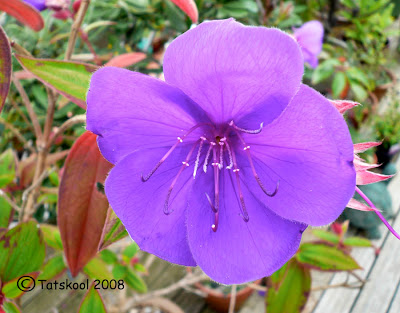 It really is the most outrageous colour, I can't even begin to capture it. It's the deepest strongest violet I have ever seen and with the velvety leaves beginning to turn red...WOW. With the sun shining through it it looks so pale in the photo!!

Now on to the next part of my colour theme. Remember my Bonsai Crab Apple Tree that was the impetus for my Apple Blossom thread....well I have rather ignored it in this wet, wet summer and left it to do it's own thing and this is what it looks like today, bearing not one but four crab apples. Oh dear that will probably mean less flowers next year as fruiting uses up it's energy. Remember also that I told you that while the leaves on a bonsai will become smaller, the flowers and fruit will always be full size. 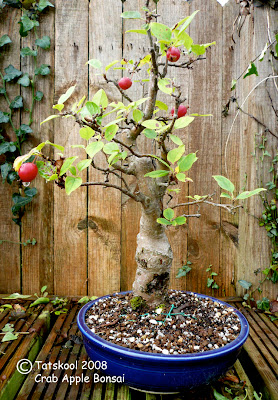 OK so keep these colours in your memory and we will move on.

I have been tatting Ann Bruvold's Minor Norwegian Dragon ...if you haven't made this one yet then you are missing something good. I have done Martha's dragon for my 25 motif challenge but the Norwegian Minor Dragon is in a whole different group!

My first one was in two colours of Flora 20...practice piece! I was glad that I had used two colours so that I could be sure that I was using the correct shuttle. The colours in Ann's diagram are the ones of the working shuttles...like the diagram I did of Iris's Eleanora. 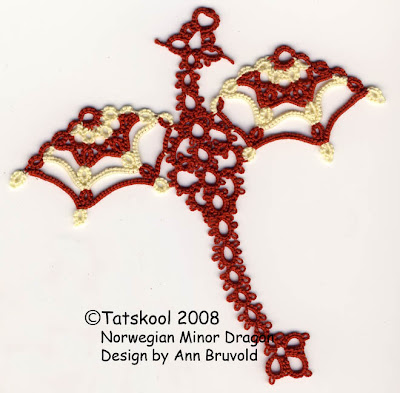 Second dragon in one of my own threads. 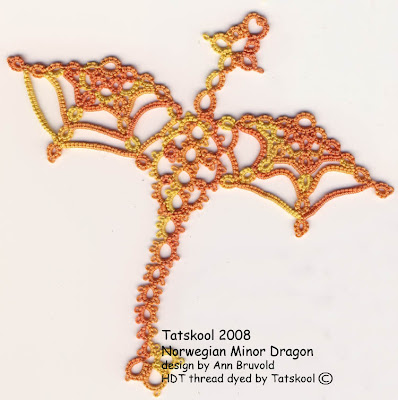 What to do my next dragon in, it was a puzzlement. None of my dragons fit the major dragon types that Ann listed so it was off to my stash of samples and trials that I did in the Spring. Mmmmmm Berry Dragon...I had 2 samples that would fill that bill.
They originated in a curious way. I had so many little bottles of trial mixes to throw away, but it seemed such a waste soooh I grouped them together in threes and tried them out on small skeins, and put them on one side for later.

Well now it's later and one of them gave me a lovely Berry Dragon my favorite so far, even has beads. I loved the way the tail worked out. these dragons remind me of the Luck Dragon in the Never Ending Story... remember that? 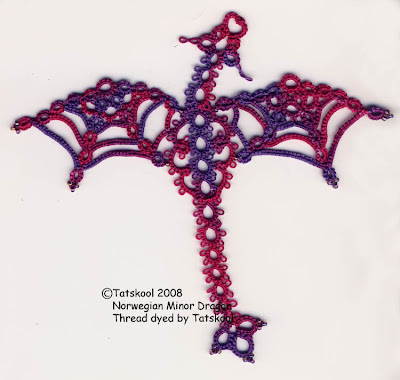 So lots of tweaking later and I have my latest HDT. Berry Burst! 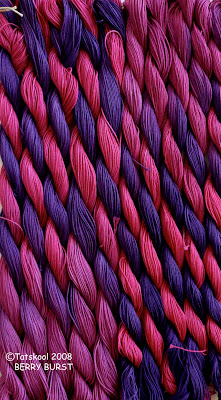 You can't believe how difficult it is to show you the correct colour so lets imagine......and get your juices running........ well, over here in our supermarkets you can buy bags of frozen mixed berries to make pies. So imagine, redcurrants,cranberries, raspberries, loganberries and strawberries going into my pan. Then lets add bilberries, blackcurrants...and then blackberries and blue berries.

Making my mouth water I don't know about yours!!

Well when the berries get hot they burst and their juice comes oozing out into little pools which gradually mix.

With me so far!! well that's my Berry Burst...I wanted such an intense colour palette that I dyed it twice. Sometimes threads look so nice when they are wet that I an sorry that they have to dry much lighter.

Here is my finished 'Berry Burst Dessert', Hearts Desire by Susan Fuller and Jane Eborall's SCMR butterfly both my favorites in HDT's. 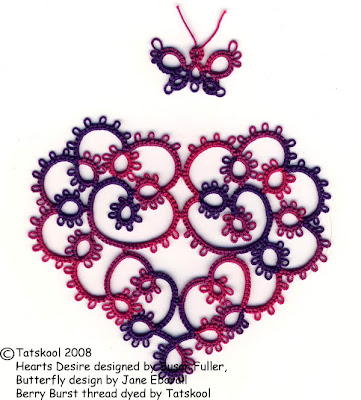 BUT having dyed all my threads I suddenly began to wonder if Yarnplayer or LadyShuttlemaker had dyed the same colours, heart in my mouth I checked them out and found.....Yarnplayer's Purple Punch.....very similar but on closer inspection I think mine is VERY much darker. She also seems to have light areas in hers unlike mine.

Oooer! I hope that mine is different enough...I think it is and it was dreamt up long ago.
Posted by Tatskool at 4:51 pm