I have been doing a TIAS....Tat It And See for those not in the know...where you tat a pattern blindfolded.......well not literally that would be too hard!!

I am addicted to TIAS's.

Some are pretty easy but some are soooh hard...particularly the recent ones where there are written instructions and NO diagram...now how hard can that be...very hard!

The one that I have just finished is by Dani and has been a killer!! I have untatted and cut out whole rows...something I have never done before...all in the interest of trying to work out what I was making.

Day 1 would have gone fine if I hadn't made a mistake that I didn't notice and made one picot too many. Can you see it, 5 at the top and 5 at the bottom and the little blighter sticking out at one end!! 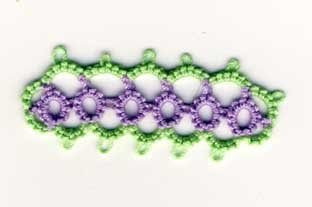 That of course threw Day 2 out and if it hadn't been for the scans shown by Ladytats I would never have know why this round didn't work.

Oh but I did like the pretty colours. So I did that round again and improvised with the extra picot!!

Day 3 finished that round and all was going well apart from being a little lopsided!! 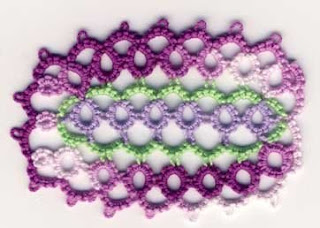 Dani had given different options to follow...as if I wasn't already confused enough! and I picked Option A ...mainly because I made a mistake!! and also because it proved to be the shortest! I made a mega mistake of not realising that my pattern for Day 4 had continued over the page ...ooops! So Day 5 didn't work... I was a ring short!! 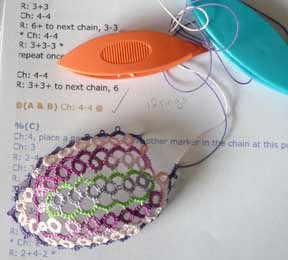 so I had to cut off that row and do it again! 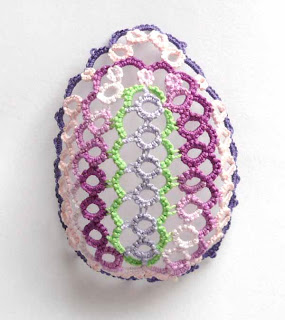 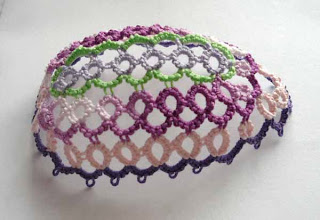 Now it was beginning to look like something..but what was that something.....looked a bit like half an Easter Egg to me.....so on to Day 6

Day 6 went fine and my Easter Egg was beginning to look like an Easter Bonnet with a brim.

What would it be on Day 7 the last Day.....well day 7 didn't work for me, having done another 6 rings I deemed it a good idea to do a calculation and it seemed that I was going to be a lot of rings too many for the available picots left to join to.

So I appealed to Dani for help...ahhha it finally transpired that some of my too many rings should not have been joined to the previous round...are you still with me?????

So after another lot of serious untatting I finally finished it last night and showed it to dear hubby. 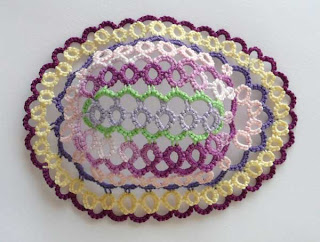 Now you are probably still wondering what I was that I had made...was it an Egg or was it a Hat?????


Showed it to him and hubby knew immediately what it was.

Now I realise that there may be one or two of you out there who don't know what a Chiton is so I looked it up on Wikepedia for you.....and we find that it is a primitive marine mollusc...well you knew that didn't you!!

Sometimes they are called coat of mail shells..this is what Wikepedia had to say

Chitons have a shell which is composed of eight separate shell plates or valves. These plates overlap somewhat at the front and back edges, and yet the plates articulate well with one another. Because of this, although the plates provide good protection for impacts from above, they nonetheless permit the chiton to flex upward when needed for locomotion over uneven surfaces, and also the animal can slowly curl up into a ball when it is dislodged from the underlying surface. The shell plates are surrounded by a structure known as a girdle.

Not convinced are you???

So lets look at some photos...here is Tonicella lineata from Wikepedia 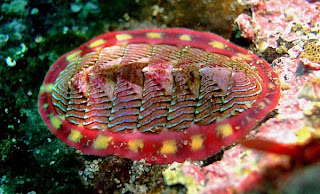 my goodness isn' that pretty!!

or this little fella from this site 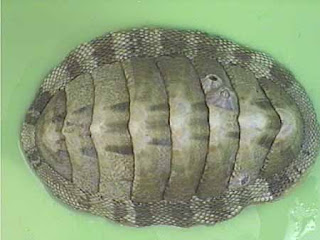 Another picture of mine and surely you can all see that I have indeed made a Chiton.
You can even see how Dani has got the front end pointed and the back end blunt. 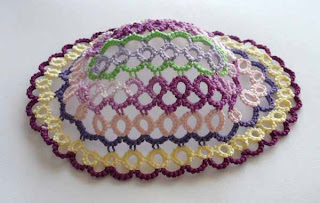 Thank you Dani so much ( sorry for taking the mickey!!) I love my Chiton and he can be animal Number 32 in my continuing Animal Challenge (see mission statement at the top of my blog).

Of course I am still wondering why Dani designed a Chiton especially for Easter!!!
Posted by Tatskool at 7:47 pm