A motley mixture indeedy!
Who would have thought that volcanic ash would affect my tatting!
We were not due to fly anywhere, we were not stranded anywhere, we don't have ash raining down on top of us.....we just watched as the volcano erupted...thinking...thank goodness it doesn't affect us.
But of course it did affect us in ways we hadn't thought of.
My little story started 11 days ago when I went for an eye test...and decided that I wanted to keep my present rimless frames...and so had to part with my specs for a week.
In return I was to be astounded by some new state of the art, varifocal wideview digital lenses, said to be as different from  my present varifocals as they were from bifiocals.....mmmmm!
SO I put up with wearing my old single vision distance specs and constantly having to change to reading specs...how did I manage with this in the past...well I didn't tat while watching TV for one thing!!
Tatting and TV watching have both suffered until in the end I am just using up little bits of thread and tatting flowers.......I can't stop myself from picking up a shuttle no matter how good the TV programme is!
I stuck it for a week without a murmur and went to collect my new specs.....but...yes you guessed it....the orders come from the UK by AIRMAIL!
The manufacturer had finally resorted to sending is deliveries overland.....how archaic does that sound!
Then of course we realise that it affects all our mail....insects to feed the geckos.......birthday gift for a friend........incoming and outgoing...and yet the post office continued to accept mail.
Pause to answer phone.....yipee my specs have arrived....tatting can be resumed tonight!
So that's the ash..that leaves the potpourri, chocolate and cherries.
All our major supermarkets are offering meal deals.......for 10 euro or a little more we get a choice of main course, plus veg dish, plus dessert AND a bottle of wine. It's all good stuff, top of the range food (yeah I know its full of additives..but it's only once a week!)....
and the meal deal costs less than half the cost of the items bought individually.
Our favourite mains include paella, spinach and ricotta parcels wrapped in filo pastry, to name only two, there are yummy potatoes dauphinoise, boulangére potatoes and the wines are decent....oh but its the desserts!
Millionaire's chocolate tarts, chocolate and pecan puddings.......
This is supposed to be a dinner for two but recently they have introduced a huge Belgian Chocolate Gateaux to die for! 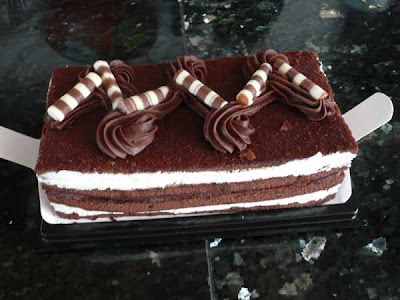 That view from above makes it look much thinner than it is!
We soon learned that it will do us for 3 days amply!
The white of the cream reminds me of our Cherry Tree.....which is flowering it's socks off ...the best ever as normally the blossom by this time would have been hit by a gale and be in tatters. But we have had no rain since it began to flower.
Tadgh went out to explore it's beauty...like any small boy he is in to climbing trees! 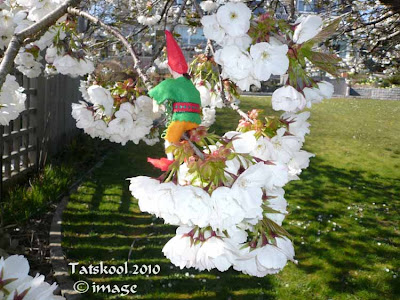 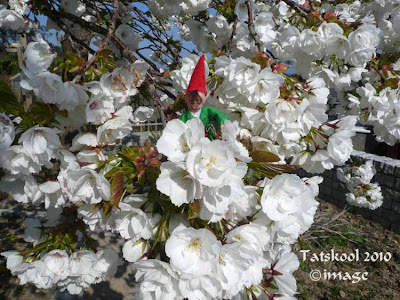 The weather was so warm last Sunday that we lit our Chiminea and sat outside to eat our dinner, with the Cherry Tree in full bloom, what is the weather coming to when we have summer in April. Fingers crossed that it doesn't happen again that we have no summer in summer!
That just leaves the potpourri and that reminds me that I intended to talk about tatting!!
Every now and again I give my tat lassies a challenge and this was the most recent one.
This time I gave them each a large (about 5 inches sq')potpourri sachet scented with vanilla...my favourite. 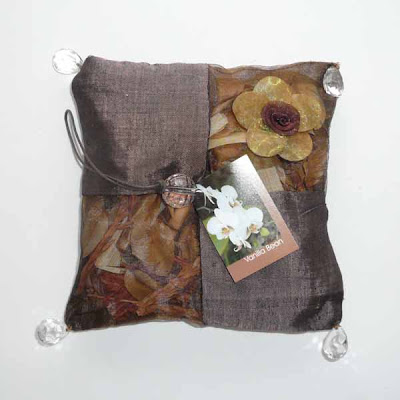 I had had these sachets for a while, intending to dye some appropriate thread to match.
then I realised that I already had!
Dabbling with trials for Antique Bronze, I had 6 skeins that I didn't like one little bit....until I looked at them next to the sachet, and bingo....they were spot on!
They each got a skein...some were 20, some 40 or 80 and were to decorate the sachet however they wanted.....an edging all the way round, maybe only across the center or maybe just a motif.
Now I have to admit that usually I don't finish my own challenge!! but this time I did.
I edged it all the way round in size 40 and still had a lot  left from my 50yd skein. 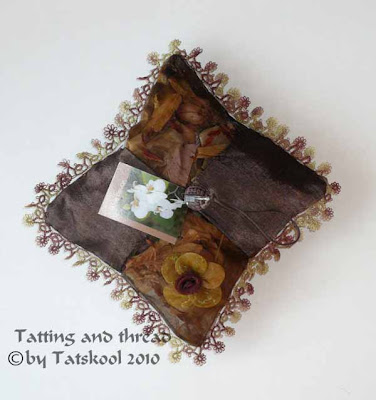 Not a very good picture...but it's now on it's way...volcano permitting...to my friend in Mississippi for her 60th birthday today.
Here is a close up of the edging...I guess I was in edging mode in my TAT tests. 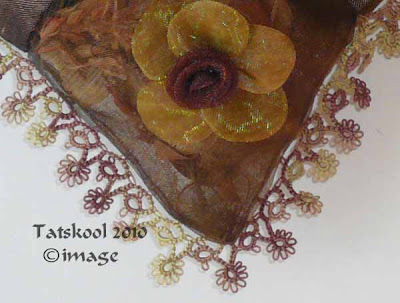 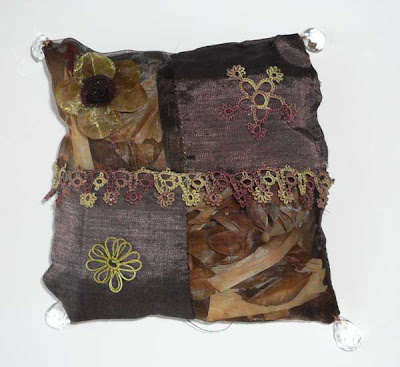 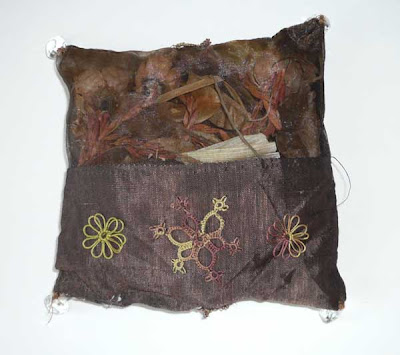 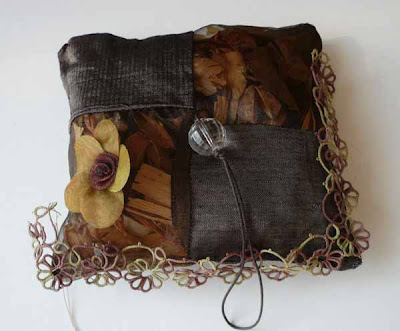 This one is much more ambitious, using size 80 and another vintage pattern Daisy edging...I forget where I found this one. She did get a lot further but unfortunately ran out before she could get all the way round and the thread is unrepeatable. 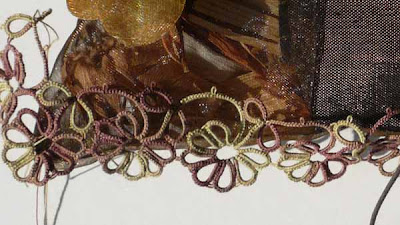 They haven't all come back yet but here is another in progress..together with the cards for Mary Konior that we had just finished.....had a lovely letter of thanks recently from Mary's daughter. 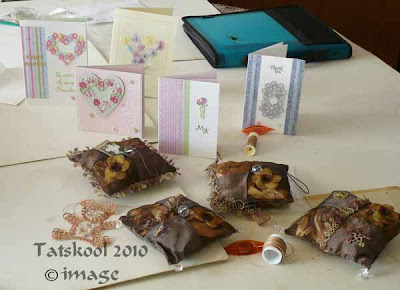 Just goes to show that no thread goes to waste!