I must admit that I approached being 70 with some apprehension, after all every one knows that that's REALLY old!
Hubby was none too happy last year when he found out that he can't hire a car anymore!

With the wisdom afforded to me by my grandson(see my first post on being BACK) I decide to enjoy being 69 ......but now that I AM 70 then I will enjoy being 70 as I will never be 70 again!

My funniest Birthday present was from my cousin's wife to whom I had told grandson's tale.
Mmmmmm! 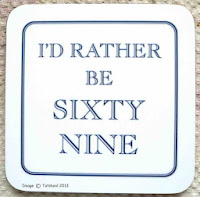 I remember when I was at school and we discovered the lines on our hands and their meaning, and I seemed to have a short lifeline! I always had a suspicion that I might die young.
Well now at 70 I don't have to worry about dying young anymore....that's one good thing(about the only one I can think of!).

So I determined to hit 70 running! in the hope that it might not catch up with me.
Partying with as many family members that I could visit in 12 days....preferably those who were older than me to make me feel a young sprig.
So after my exploits on a barge in Lancashire, we went to Cheshire and then down to Norfolk to see my cousin who was 70 a whole two weeks before me.
His wife as well as giving me the coaster had made me a beautiful hand stitched card. 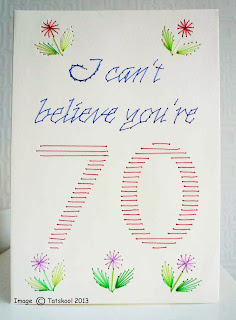 Don't you just love it when people go to so much trouble.
They also gave me a copy of our family parties...every Christmas at Grandma's. 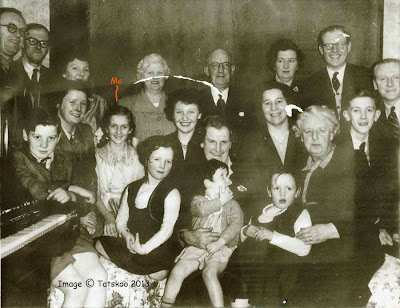 That's me and my cousin leaning against the piano. We reckon that we were 11.
Grandma is on the right. She must only have been 68 and yet she was always sooooh old.

Back to the ferry in Wales all the way across England, We looked for a nice place to stop half way and hubby suggested Stratford. Oh YES I thought.
I was asked by Kathy in a comment (yes I Loooooove your comments, they make it all worthwhile) if it was a coincidence that I visited Jane on her Birthday. The answer is no, not at all.
It wasn't actually ON her Birthday, it was a week after mine and a week before hers.

Back home there was time for just one more party with my tatters.......especially as one of them had a Birthday coming up, the same day as Jane.
Hubby couldn't understand why I would want another Birthday Cake so long after my Birthday!
This one a real girly cake befitting my age! 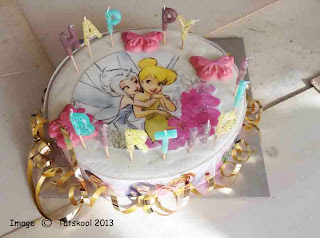 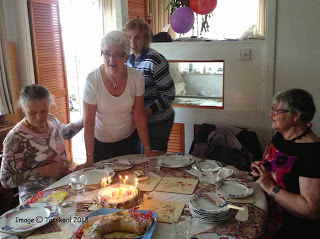