Another weekend of Geckos!

Most years we go to a Geckofest in Germany...this always seems to be potentially terrifically exciting...but generally isn't!

This year it was to be held in Berlin...but was actually 70 kilometers north of Berlin in a small village....the drive by taxi there and back was beautiful....still sounds exciting...except that it is always held on the Whit Bank Holiday weekend so that all the enthusiasts can get to the meeting....so far so good...but previous experience has taught me that in a small place the shops all close at 12pm on the Saturday and nothing opens again until Tuesday.. I sometimes think that they roll up the streets and all go and enjoy themselves somewhere else.

Even the garden centers close which is the exact opposite to my country where they would expect to do great business on a holiday weekend.

So on Saturday morning I have to make a decision...do I go and look for shops(which can be very interesting) or do I stay at the meeting...as Saturday morning in when the breeders show their geckos and is the best bit for me. The rest of the time is spent listening to talks...in German in a darkened room. Honestly there are only so many slides of geckos and where they are found, that I can take...especially when I can't understand the commentary.

There are only 2 other people from England out of about 70 who go and they are now great friends who make it worth while for me.

Well... a year or so ago I decided that I would tat geckos to take to the Geckofest. I always look for gecko souvenirs there, so I would show something new to interest gecko enthusiasts or their families.

I tatted like a mad thing and produced a box full of geckos...all different...which means that I didn't actually want to part with any of them!!

So having tatted all those geckos we didn't get to the meeting last year after all!!
This year I almost didn't make it either. It was only the very day before the flight that I was deemed fit to fly and so it was all a bit of a rush to get ready. Hubby desperately proud of my geckos wanted me to take them, so unprepared as I was I did.

I had intended mounting them on card with an explanation of the history of the pattern and the designer and about the thread, producing a poster to say...in German...how many knots they took and that they had Swarovski crystals, hand dyed thread, blah blah blah, but only managed to make a laminated sheet of a collage of my geckos. 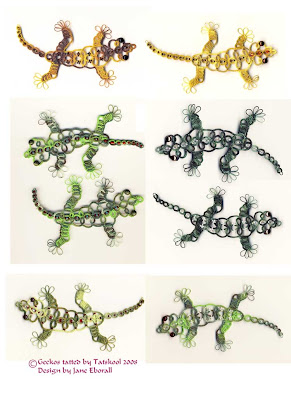 In truth is that I didn't want to part with any of them, but if I was going to, then it would be to someone who appreciated all the work and skill that went into making them and was prepared to value my time and skill.

And so I spent the Saturday morning tatting a gecko, a lot of people were interested and I soon sold one to a lovely fella for his wife who was the gecko enthusiast. he asked her first if she liked it. I could have sold a lot more...at a price...one lady thought she was going to buy one for 30 cents....I don't think so!!! I am still laughing at that! and I was happy to keep my work for another day.

I did give tatted butterflies to everyone who admired my work tho'.

So would you like to see the gecko that I tatted.

In my gecko tatting season last year I designed a new tail for Jane's pattern (Pamela's Gecko)to make a Leaf Tail Gecko..then I ran out of steam and never actually showed it to Jane...I never even scanned him.....so here is my original Leaf Tailed Gecko...

This is a real Leaf Tail Gecko 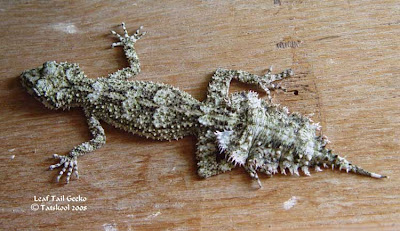 and this is my interpretation. Grey was the only suitable thread that I had and it was my intention to dye some thread for the purpose. 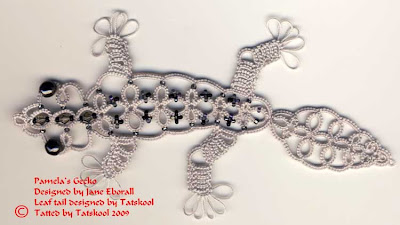 and yes Jane I did write out the pattern! but my drawing isn't much good.

For the meeting I asked himself...who knows these things what colour I should use. Unfoetunately he replied all Leaf tails are nocturnal and tend to be grey or brown.

Well I had a 15 yd sample that I made way back last year and called Elephant Browns and that would be perfect.
Unfortunately by the end of the weekend I had run out of thread...will I be able to remember what it was???? I do have a record of the dyeing and the thread was Coats Aida 20 in a fawn colour that I didn't use much ..just to see what it would look like. Aida seems to be thicker than my normal thread and so the gecko is bigger and needed more thread.

Here he is...poor little soul..he is 'armless!! He has lovely nocturnal like opalescent eyes...part of the fun is choosing the eyes and the beads and the Swarovski's. 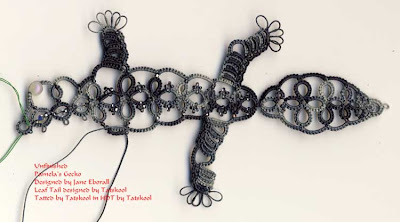 Here is a taster of some baby geckos at the show...... 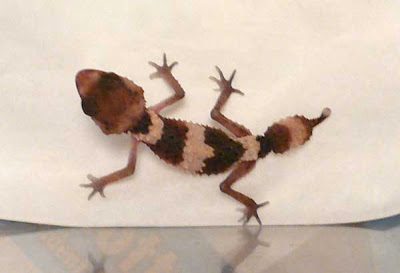 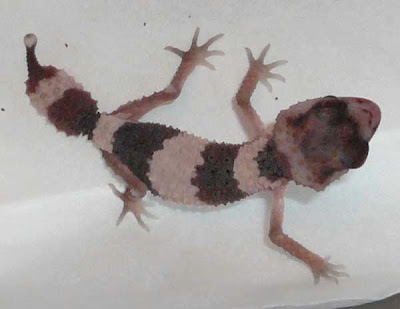 They are Knob Tailed Geckos from Western Australia....several generations ago for these little fellas as they are captive bred. So many geckos species will survive due to the skills of these enthusiasts.

Goggle Knob tailed Gecko to see how gorgeous they are.

I think I need to a block tatting gecko pattern to produce these stripes....anyone, anyone!!!

You must be tired of reading about geckos so I will save what I tatted next until another day.

So did I enjoy my weekend...well yes i suppose enough to consider going again next year!!.....I soon forget the boring bits!!

The Hotel hosting the meeting was on the banks of a canal and it was lovely to sit out in the sunshine and watch the boats go by and under a fabulous old lifting bridge. 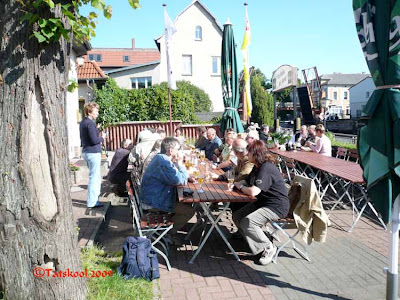 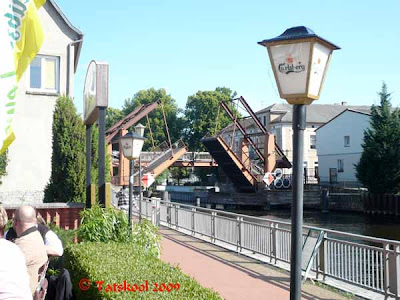 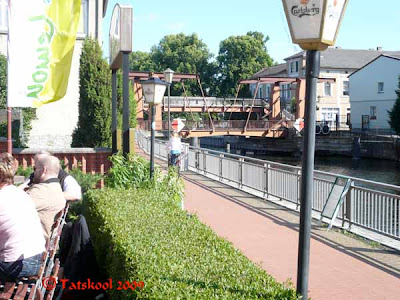 Before the bridge is a lock where the water level is raised and lowered. 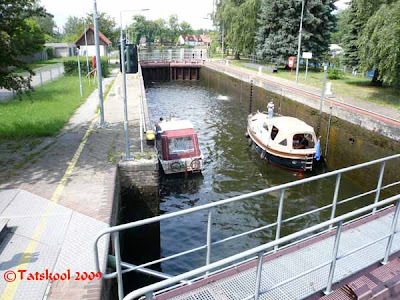 The weather was lovely except that at about 5 to 6pm the sky often goes black and is followed by sheeting rain, thunder and lightening...the exact opposite of here where at that time a dull rainy day will often brighten into sunshine and give a lovely evening.
May/June is Spargal season.... white asparagas so we always have to have some.

I can understand why the village closes down as the people go out and enjoy themselves. 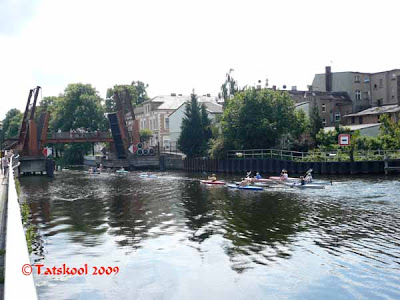 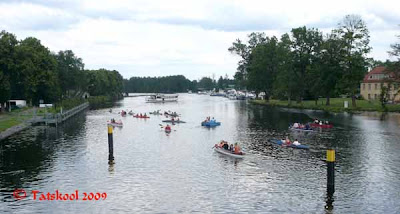 Even the hotel was decorated to look like a boat. 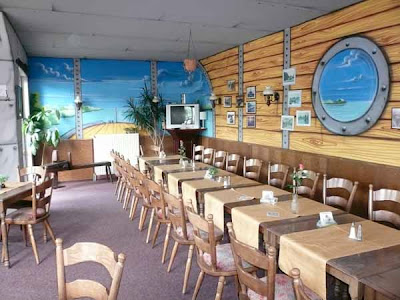 Next year the meeting will be in Dresden.....or somewhere nearish!!!
Posted by Tatskool at 2:09 pm