Does anyone else suffer from the terrible addiction of postman watching....ie watching for the postman...not actually watching the postman per se!!

Here follows a dissertation on the postman so if you are only here for the tatting, please go straight to the photos!! Everybody else settle down with your cuppa...you may already have one in your hand if you are reading this on tatting Tea Tuesday...in which case you should be tatting!!

When I was growing up in England I never had this problem. I would come down to breakfast and there would either be post on the mat or there would not....and that was that... I knew exactly where I was!...except at Christmas when there would be a second post to anticipate.

When I came to live in Ireland 38 years ago all that changed. Those were the days when we got real letters....from our parents every week without fail...posted sunday afternoon and we got them on thursday.

Let me tell you about my postman...I will call him 'Shamus' to preserve his anonymity!
He was my postman for at least the first 25 years. 'Shamus' would walk the couple of miles to the little local post office/shop (now sadly no longer a post office)early in the morning and sort the mail for his route.....and off he would go. Rumour had it that he had had polio as a child and couldn't manage the bicycle that went with the job and so he walked or should I say trudged in wind and rain, hail and snow.

It wasn't all that long a route, maybe 5 to 10 miles, but it was up and down hills and a lot of the houses have very long drive ways..often up more hills and no one had a post box at the bottom of the drive in those days. He would leave his second,often heavy sack of parcels....yes he carried most of the parcels too...at the bottom of the drive and trudge to the door.

So this was one thing that made his delivery take so long but there was another factor!

'Shamus'had 'ports of call' on his route! He would ring the doorbell and ask for a drink of water! I was warned about this when we came to live here so that I could decide which route I would go down!

Some people offered him tea and whatever cake and scones and jam they had and of course they became his regulars....some gave him water and they didn't become regulars.....I gave him orange juice!

Every so often he would ring the doorbell with the rain dripping off the end of his nose. He looked so tired and weather beaten that I couldn't help but feel sorry for him ..it was obviously very thirsty work. But I knew that once I invited him I would be one of his regulars. So he would stand in the porch and gulp it down. Mostly tho' between gulps, he liked to gossip, he could tell you everything about anybody. Trouble was that he had such a strong accent and he mumbled that I really couldn't tell what he was telling me!!

And so as we were near the end of his route we would be lucky if we got our post by 2.30pm....if it was a special day like Valentine's day or he had leaflets to deliver to every house then we would maybe have to wait until much later. Coming up to Christmas it could be 6pm before he arrived. Just before Christmas they would split his route and we would be back to normal!

When he had finished he would walk home. I would often come across him as I drove to my Brownie pack once a week. There he would be bent over carrying his empty sacks trudging along. So I would give him a lift....and be treated to the latest gossip which I couldn't understand. As long as I just nodded we were fine.

I well remember an Irish joke in which and Spaniard asked an Irishman if the had anything similar to their word 'manana' (tomorrow will do!). The Irish man thought long and hard and then said:-
'Sure we wouldn't have anything that urgent!'

We never complained about our postal service, we didn't want him to lose his job and we never had anything that urgent...but others did. It was to be expected that if a letter was posted in the evening it would arrive next morning...not next evening and so people were missing out on job offers, appointments etc. They asked the post office to keep their mail and they would collect it themselves, way quicker.

I think our postal service is one of the best in the world, we have no post codes and the bare minimum of an address will usually find us. I remember a friend getting a letter that was addressed to his name and just Ireland. What other country would take the trouble to find him and deliver such a letter.

One day, to our amazement a Post Office van drew up mid morning and delivered our mail.

'Shamus' had retired...at last!!!!....but for several years he was to be seen every day out walking his route...that was his life.

In 'Shamus's' time we wouldn't know until the end of the day if we had mail, had we missed him or was there simply nothing. So watching out for the postman was a days job!

Even now when we usually get our mail by lunchtime....well it's still the same tricky route. The little post office closed and was transfered to the next village, now that has gone also and a bigger custom built sorting office does the job...but the route is twice as big!!

I still can't help having one eye on the window, watching for the van...will it drive past or will my vigilance be rewarded.

What is the point of all this in can see you asking....well isn't it the most wondrous thing when you do get mail, unexpected mail.....so rarely tatting mail!...

What should i find in my porch but a card from my new friend Suneeti. 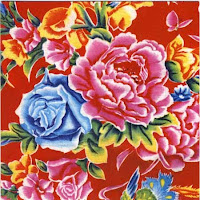 Now isn't that a pretty peony card to get. Suneeti lives in Dublin and was taught to tat by her aunt and grandmother when she was nine years old. Like us all she doesn't meet many tatters and has learned modern techniques from the internet.

Suneeti's card was a thank you or introducing her to the world of hand dyed thread. But that's not all, she had included a lovely snowflake that she had tatted.

I love the way she tied of the ends around the ribbon to make a hanger. 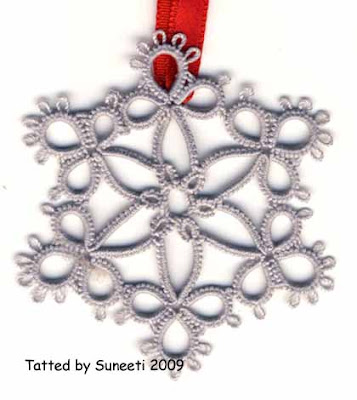 Wasn't that a lovely thing to do, it's not that often that I get somebody else's tatting. I think I could still count the number of times using only two hands full of fingers!!

I asked her about the pattern and this is what she said:-

I've looked at many snowflake patters, in books and on the web, and have never found this one. There's a story behind it as well. Nearly twenty years ago (!) we had a professor visit from New Zealand on sabbatical. His wife gave me a Christmas card with a tatted snowflake on it, in this pattern. I don't know if I still have the original card. But her card prompted me to dig out my shuttles again because I realised that I could do more than tat edgings for hankys and doilies (neither of which I have ever enjoyed). And so I began tatting snowflakes and little motifs to put on baby-onsies and t-shirts, etc.

She said that she would like to share the pattern with you all as a thank you for all that she has learned from the online tatting community. But first I must ask..does anyone know this pattern, who the designer is???? I don't want to tread on anyone's toes.

She also tatted it in Rainbow Bright... 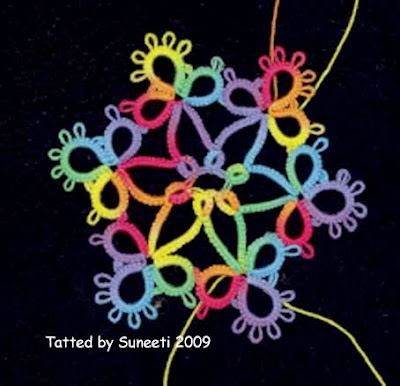