I don't enter a lot of giveaways...partly because I often feel that the prize should go to someone else! but often because I know that I am not going to win anyway,(ok sour grapes I know). There could be two names in a hat and mine would still be drawn last...that's the story of my life. Don't you wonder why some people always win and some never do? How can this be when the frequent winners are no where near the drawing.There really need to be serious research done!!

I have tried positive thinking, once I looked at my raffle ticket and pronounced that it would be the winner and blow me but it was!!..But that never worked again!

So imagine my surprise when I won Ladytat's giveaway. Even funnier was that I was No 13 to comment!

It was waiting for me when I got back from my Birthday trip...a lovely surprise to come home to....couldn't wait to open it. 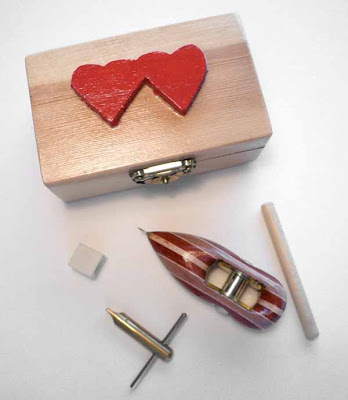 It's a beautiful shuttle made of laminated wood...not sure which woods they are and comes in it's own sweet little box, with a screw driver, a dowel for winding and a hook protector...it's got a very neat small hook....but no instructions for a 'dummy'!

The wood calls for a much closer look. 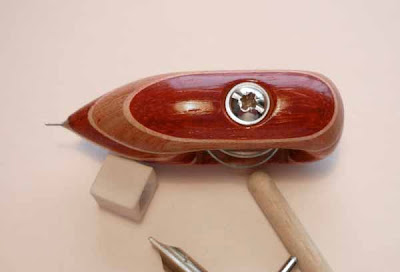 Well now what better thing to tat with it than Ladytats very own design!
This is Meandering Path that she has designed in Sharon Brigg's Design Tat class. A great class that I too am taking...and have got way behind...but I have started Test Tatting....instructions are on her patterns blog. 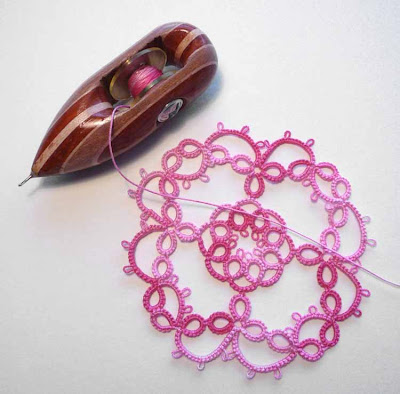 Now I know it looks as if I tatted it using my new shuttle....but that's a bit of a cheat!!
Truth is I am still trying to learn how to use it...bobbin shuttles just don't come naturally to me....I will persevere and I will treasure it in my collection as an example of a silent tatter...
Thanks so much Ladytats for this giveaway.

Let's take a closer look at the motif. This was my second attempt...not that there was anything wrong with the first...it just wasn't in a pretty colour. This is my hand dyed Raspberry Sorbet in size 30. 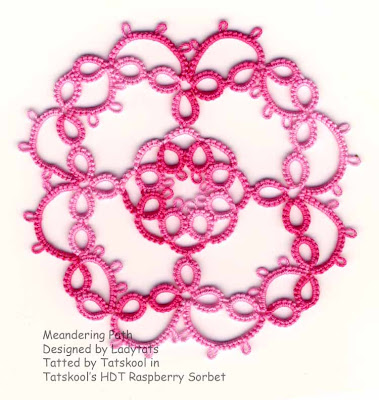 Now isn't that a pretty design? I would have liked to have tatted it in two colours but wanted to stay faithful to her original design without altering it.
Posted by Tatskool at 6:40 pm