Wonderful Weekend...the end is in sight!!

There were still more exciting things waiting for us.

But before I start...my friend has given me a CD of all her photos...another 286 and she has some smashers. I hate photos of me but I guess you would all like to see a couple...Fergeal has already posted some on his blog...but here are a couple more.

This is the queue for morning coffee and I am the one still working trying desperately to teach this lady the flip!! She tried from the train journey til we left for home and she still couldn't do it...but I don't give up!! 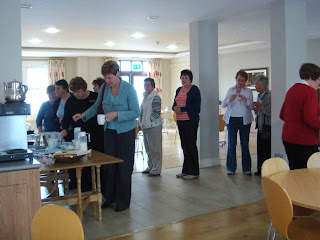 Second me picture is at the Giants causeway. 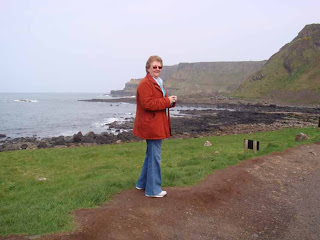 That's enough of me!

In afternoon on Sunday we were taken to the Ulster Folk Museum near Belfast.
The part that we saw was a reconstruction of a town. All the buildings dating from mid 1800's to early 1900's had been painstakingly rebuilt and furnished to perfection. There is even an old cruck built house from the 1700's. If ever you go to Northern Ireland it's a must.It's a wonderful place

Trying to think what would interest you the most.....this is the haberdashers shop 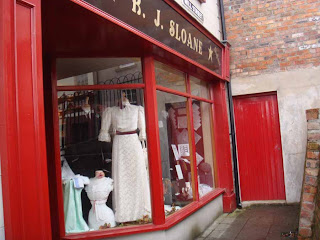 inside was a treasure trove of days gone by.

I liked the Picture house which was showing a Charlie Chaplin movie. 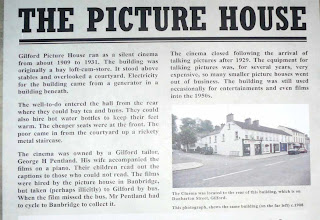 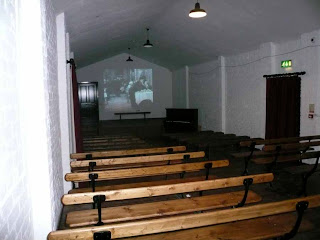 It all looks pretty cold and spartan BUT you could hire a hot water jar for 2d to keep you warm...I like that. 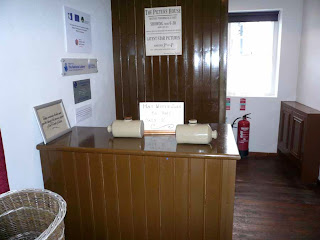 There was soooh much there,the school, church and all the tradesmen, the difference in living standards between the tradesman and the bank manager was phenomenal!
I will have to stop !!

But the weekend still wasn't over, there was one more treat to come. There was a special evening in the house, 5 course dinner and a musical evening called Music for an April Evening..Songs of the Musicals. After the diners had eaten their I am sure superb meal we joined them for the music and it was outstanding. A keyboard player who led the group,a cellist and jazz violinist accompanied four talented singers/performers. They were a joy to listen to.

A delightful end to a special weekend.

On Monday we came home, tatting away on the train.

On the journey from Belfast to Dublin chugging slowly on an old commuter train as the express was not running....a lady ..our age and her daughter sat opposite. They were going to Dublin for the day and of course were fascinated by what we were doing.
I didn't take much part in this conversation as I was seriously untatting size 60!!

Jackie gave her a little flower and she made the typical comment that she couldn't do anything like that... 'I just like to enjoy myself' said she!! Why do people think that we don't enjoy ourselves!!!

Before she got off the train she produced from her money purse a few bits of straw which she said came from the Christmas crib in the cathedral where she lived. She divided it up into three little bits and passed one each to Jackie and me and told us to keep it in our purses..'and then your purse will never be empty', she said.

Now I would normally have ditched this at the first opportunity but it was such a sweet gesture that now I am stuck with two bits of straw in my purse!!
Posted by Tatskool at 5:32 pm