I KNEW HE WAS UP TO SOMETHING!!
First things first tho'.
I know you are dying to know which of the ladies  got the job.
Maureen was the only one to take a guess...and she was right!!
It WAS the lady in Red... I had a hunch it would either be her or one of the ladies in Green, knowing his penchant for those colours.
Here he is offering her the job... 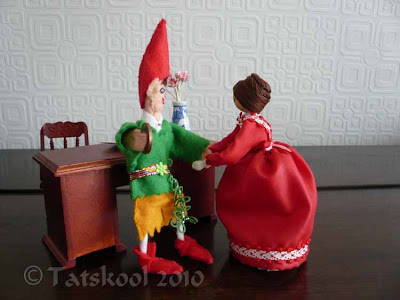 Of course the first thing we all want to know is...why did he pick her...was it for..
her typing skills,
proficiency at shorthand,
or even her neat handwriting??
NOPE none of these.
Apparently it was her ability to sit in his chair, get her feet under his desk and be able to work at his desk!!
He reckoned some of those skirts and petticoats were so stiff that the ladies could never sit down...let alone work! 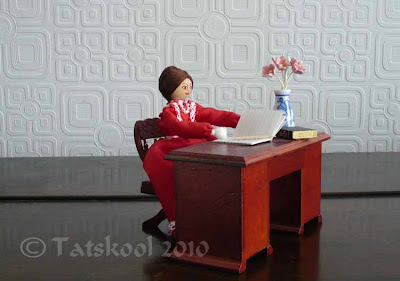 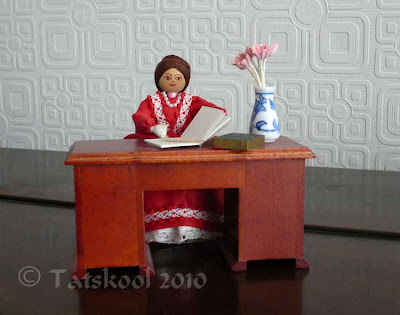 Apparently he asked her what he name was and she replied that she didn't have a name...aw shucks how awful! so he decided to call, her Scarlett....how sweet...or is it!!
Now you want to know what the job is...so do I,
making lists to start with he says....
......he showed her what he wanted her to do. 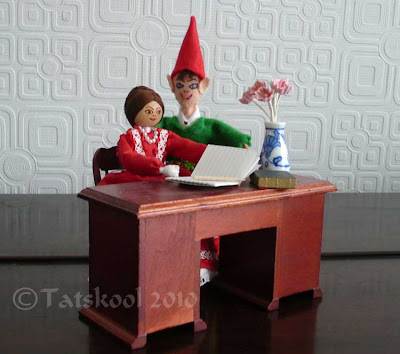 But her book looks awfully empty to me.... 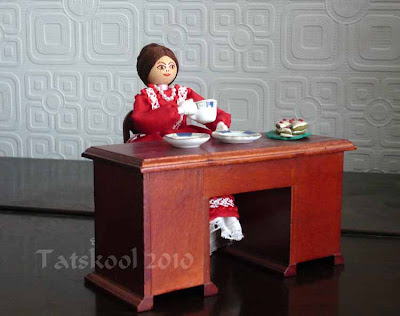 Nothing to write in it yet!!
So her gave her a tea break...and it wasn't even Tuesday!!
and with cake too!!
He doesn't bake cakes for me!
So what is the list???
We need to know Feargal.
Ok so he breaks down....
.......he has been feeling awfully lonely because every time he gets some more siblings or cousins they emmigrate....typical Irish!
That's why he wanted to keep Tadgh as his apprentice (just an excuse)!
But wouldn't you think that now he has Tadgh and Nollaig that he would be contented....
but nope they have jsut given him an excuse. He says that he wouldn't be leaving me on my own..with no help!
I feel like saying...help! what help! but he is getting a bit weepy and he knows that he can twist me
AND SO
WHAT IS HE UP TO!!
Here is the bombshell..
He has decided to go on a world tour...a grand tour to visit as many of his cousins/siblings whose mums will give him a bed for a week....take him out and show him the sights...and he says...give him a good time.
He wants to travel while he is still young......
(he wants to see Blathnaid again!!)
I warned him of the dangers of travel...he is going by air..can't take a long voyage!
He says that he will take the risk! Fingers will be crossed...for a long time.
So he wants names to go on his list, but he isn't going to plan an itinerary he says...so that he will never know where is is going to be landing next.
He needs Scarlett to manage things and tick off where he has been and has still to go to.
Sorry but he is restricting this tour to visit only other leprechauns....I know so many of you would like to be his host. Maybe next time.
Wow! how long will it take???
For St Patrick's Day, he gave me this...forgot to show you/forgot to wear it! 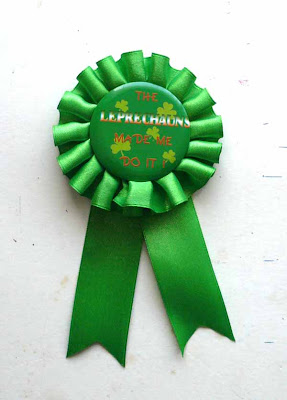 Can you read it????
How true it is!
So get in those names ASAP.
He says that he intended to leave on January the first, but it was toooo cold! so he postponed to St Patrick's Day...now he is determined to leave before International Tatting Day...
Posted by Tatskool at 10:37 am