As most of the people reading this blog will know, Mary Konior died in January this year. She was a wonderful tatter and designer, author of three tatting books..of which I am lucky enough to have two.
A Pattern Book of Tatting, published in 1985 is a  traditional pattern book with good black and white photographs and full written instructions.
Tatting with Visual Patterns, published in 1992 must have been pretty revolutionary.  Packed with colour photographs to show off the tatting, each design has only a small amount of written instructions but is accompanied by a very clear diagram.
Both books are absolutely crammed with designs and know how tips. A veritable treasure trove.
What a wonderful legacy she left for us.
Many blogging tatters are tatting and showing her designs in tribute to her..and I feel that I must join them.
The first design that I tatted was her Queen of Hearts....in Flora 20 to see how easy/difficult it was.... how much thread it took....and which shuttle tatted which bit. 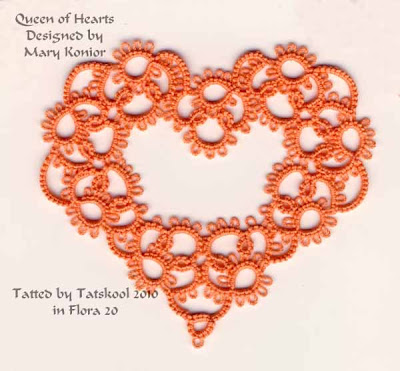 The answer was that shuttle 1 took about 4mm..it tatted the rings, and shuttle 2 took 5.25m and tatted all the chains...provided that I did a Shoe Lace Trick (SLT) before and after every large ring.
Next was to tat it in variagated thread to see how that looked... 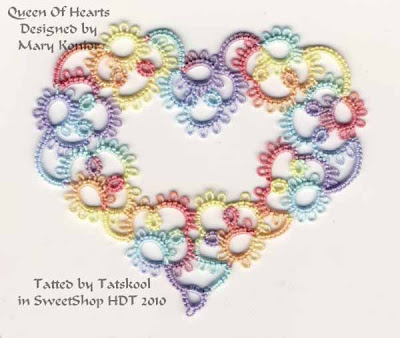 I like that....now to try it in two colours...the first one to hand was SweetShop solid Rose.. for the rings. 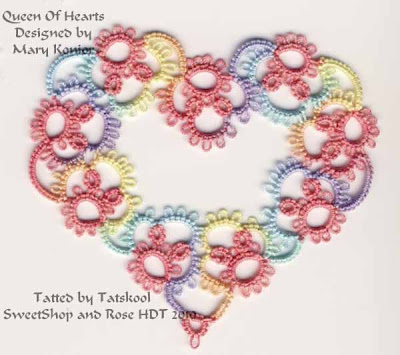 So what would it look like if the chains were in Rose.... 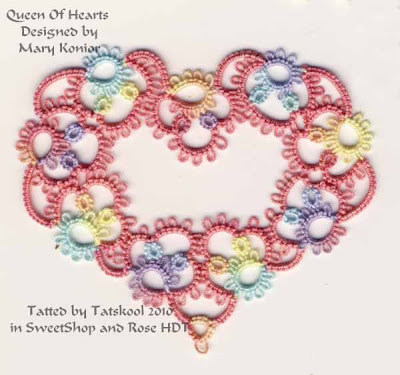 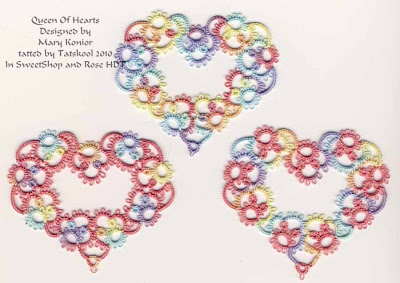 Of course as this was my first time tatting with my new SweetShop and solids after my original trials.....tatted before the 'Hope' Butterfly....I was itching to try it out using each of the solids.....but...not enough time!!
Armed with spanking new copies of tatting with visual patterns my tatting buddies tatted this too.
Here are a couple of examples. 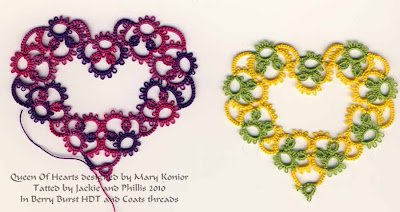 I think that will be enough for today...more soon.
Posted by Tatskool at 5:52 pm