Encouraged by my fellow tatters...I have now finished another past of TAT Artisan...well I will have when I have tatted it just once more!
A project which seemed so hard 5 years ago.....was really a doddle (almost)! Helped considerably by Jane Ebs publication of Marie Smith's' Fast and Easy Split Chain'.  If you haven't tried this then you really should.  The only problem that I have with it is the stitches are made...1st half, 2nd half......but I had 2 split chains to make and one was on the front side the other on the back side. Anyone got a way to make the stitches 2nd half, first half????? 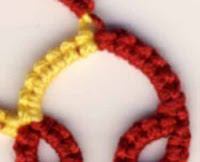 The instructions say that the second half of the split chain should look as good as the first. There is just a tad of improvement needed here. I couldn't have done this 5 years ago! So do give it a go!

There is another tatter out there who has admitted to having her TAT Apprentice pack since 2005...so I just have to challenge her to do it along with me! 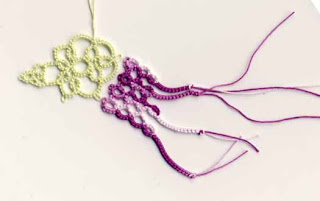 I am doing Jane's TIAS, here is my latest scan.

OK so I gotta show SOME tatting!!

Looks to me like a jet propelled squid, and a very determined one at that. If only the eye had gone in that central ring!

Next post is going to be somethig tottally tatting unrelated...well I might manage to squeeze just a little in....and I do need your help!