Ooops! there is just one more!!

I think that I may have misled you in my last post........there is just one more snowflake from this book that I tatted over Christmas. 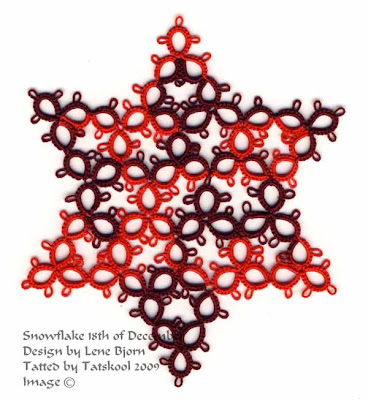 It's The Eighteenth Day of December.

This design is made of rings and split rings only and was easy to tat...as long as you stay awake!

This really is the end of the line for this challenge ...for this year at least. I am not really disappointed that i didn't get all 24 done. 18 out of 24 ain't bad.

I really have to move on to other things.  I looked thro' my TAT Apprentice folder and was horrified to find that I got my Certificate in July 2005......and I thought it had only been a couple of years.  I certainly am much more capable of completing what looked like very difficult projects in Artisan...now they just look difficult!!

I finished my 3rd one last night...only 9 more to go.....should I pick an easy one next or go for broke!

You will still be hearing from me as I still  have lots of things to show you.

Within a period of only a little over a month we have had (NB I have had only the 'lite' version of most of these!!)  extreme flooding, extreme freezing temps, extreme snow, torrential rain, gales, freezing fog, power lines down, burst pipes causing reservoirs to run low, lack of water, lack of grit/salt for the roads.......some of this is still going on causing great hardship to farmers and livestock in particular in remote areas......it has all caused extreme damage to the roads.....the main road out of our hamlet has been closed for a week, we think to 'fix' a stream which has decided to be a permanent fixture across the road!!  All of this is extreme and unexpected to us..........but here after more heavy rain last night and they say we need a whole lot more to fill the reservoirs........the sun is shining and the sky is blue!

Long may it last.


My dye studio is running with water that must have got in under the door with the force of the rain.
Oh Well!!
Will have to create some new appropriately named dye mix!!