Trying to get back to normal!

What is normal...I wonder.

Well my snow lasted only a day....to be blasted with sheeting rain (1inch just during the night) and a Force 9 Gale which was quite frightening, especially the way the glass in my huge bedroom window was flexing in and out. Finally some power line went down and we were with out electricity for a few hours. I can't even imagine what it must be like to try and restore power during a gale. Well done to them.

The still frozen fields...frozen for over three weeks...just couldn't absorb all this rain....which just poured on to the roads.....causing more flooding. Last night they froze again.....more icy roads. When will it end.
Today has been beautiful, warmish at 6C and so sunny.....but it's freezing over again now!

I have ventured out into the dye studio as I was suffering withdrawal symptoms! Dying to try something new as well as colours that I MUST dye.

Miranda sent me a photo of a doiley she has made for her mother. It is edged with a design by Tatman Fleur De Lys in size 40 Vanilla Sky and has butterflies by Jane Eb on the fabric in Size 80 Vanilla Sky. 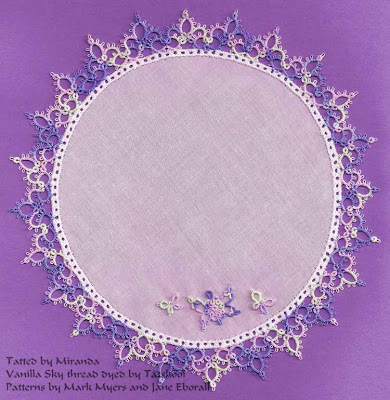 It looks beautiful to me.

During the Christmas period I did manage to tat another snowflake from Lene Bjorn's Book 24 Snowflakes in Tatting.

This one is the Seventeenth Day Of December. 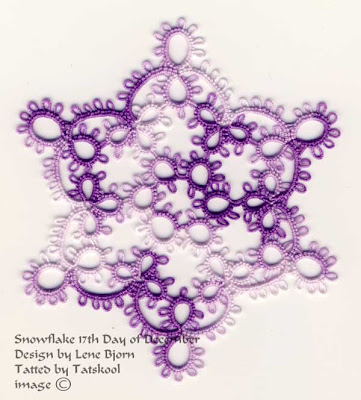 The thread is another Altin Basak  and the snowflake measures 9.5cm.

It was easy to tat and I have only one crib about the diagram.

In the diagram she shows only 5 free picots in the outer ring, but on her tatted piece there are  7.

Last night I got out my TAT Artisan Pack, still unfinished after at least two years (it was last years resolution to finish it!!). Two parts are finished.  Two more were started.  Eight more scare the life out of me!

I have learned so much in the last two years that I can attack it with renewed vigour...tho' there are still some bits that look HARD!

Tatting for this is difficult because I cannot show you...but it would be great to finish it. Spurred on by others who are now Master Tatters.......I must get down to it. The piece that I am working on has been made much better by Jane Eb's suggested ways to close a SCMR.   nuff said.