Way back in 2009 I tatted Anne Bruvold's Chinese Dragon having see the beauties that others were showing. 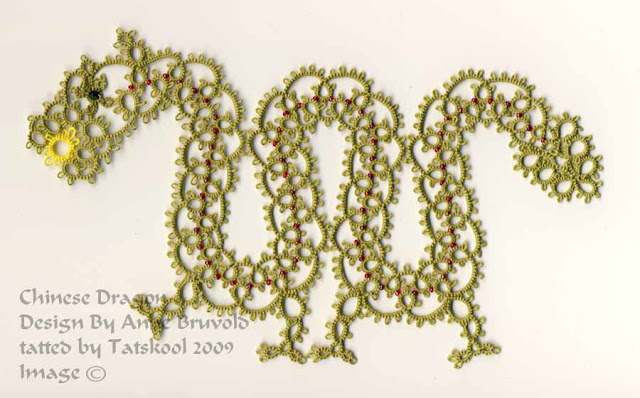 Haven't had the chance to show you before now and today seemed appropriate.

My first attempt was in Altin Basak in an olive green with Rainbow Ruby beads.

It was quite hard to manage as you tat all the way along to the tail before coming back and joining to the first side all the way to the head....I had all the long length of tatting twisting and flopping around.

It wasn't until I tatted it again in a firmer thread that I realised how much the solftness of the thread had made it so much more unmanageable.

I wanted a bead for an eye but didn't have the  patience at the time to try to work out how to do that so am sewing one on afterwards.

The pattern is very very well written, but I still enlarged the diagram and coloured every bit in as I went along to make sure I knew where I was.

The second attempt was to be my piece de resistance in my own thread, Raspberry and Chocolate Mousse. This is a favourite thread as I like the subtle colour change.

However, despite colouring in every ring and every chain on my diagram when I got to the neck I was a ring and chain out!!

I checked every bit of my tatting and blow it but I couldn't find where I had made the mistake. 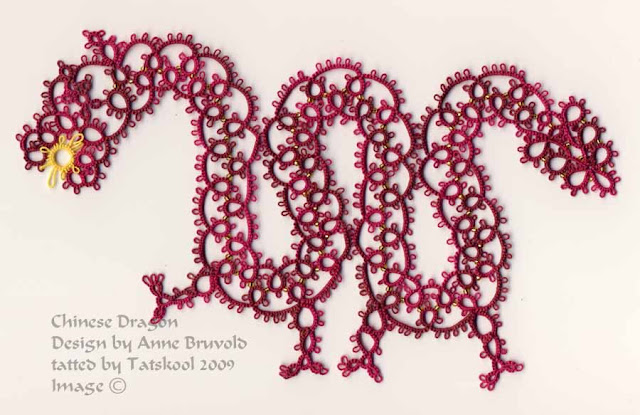 Isn't that funny, I can see as clearly as anything that the mistake is in the first loop of the body, but I can't pin point exactly where it is.

So forget it and live with it, it's just a rather differently postured dragon!

I did have to add an extra ring and chain in the neck so he has a longer neck and a slightly more bowed head!

This thread was so easy to tat with, I am so pleased.

Would love to tat one like Tattycat did holding a pearl bead in it's mouth.