I have been working away on Jane's new year TIAS (Tat It And See)......I had a little hiccup half way through when I had other things that needed to be done......so I didn't get it finished until the whole thing had finished and I saw the end result.....Norman...as Jane has called him.
Go here to find out what a TIAS is all about and to see all the other Normans.


Here is my Norman in his own personalized outfit. (Irish Norman!) 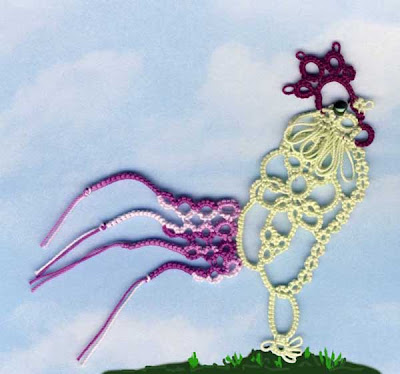 He is very proud of himself and considers himself to be Cock of all he can see.
Until there was Super Norman...my second attempt. 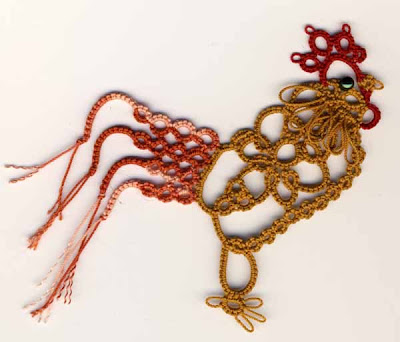 Now Super Norman was hanging around surveying the scene.... 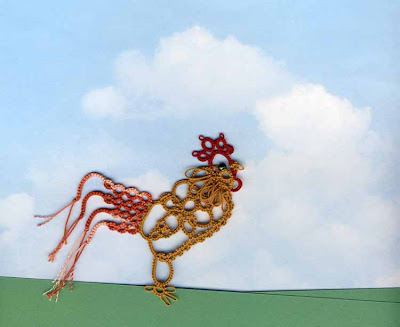 when who should come along but Norman.... 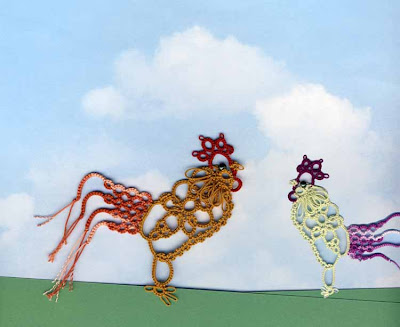 OMG said Super Norman ...you are small, what have they been feeding you on!!
Well now would you believe that both of these Norman's were tatted with size 20 thread!!
Norman is tatted in Coats Floretta 20 and Super Norman in Coats Red Heart...with Flora 20 for his head dress.....isn't that amazing!
This is a fiendishly clever pattern ...how does she do it!
If you would like to know thread amounts, here they are ...approximately.
Tail feathers.....1.75m on each shuttle.
Body.       Sh1 3.25m.       Sh2 2.55m
Head dress..Sh3   1.25m
Would you believe it but I haven't tatted an animal since Sep 2008. The Rooster is No 33 on my list of Tatted animals in my original challenge.....whooo hooo!
Posted by Tatskool at 5:53 pm