Remember me telling you that there was something extra in the giveaway package from TypsTatting.
Well
It was a little square package wrapped in tissue with a letter attached,
I was just reading the letter when up popped Fergeal by my side.....I swear these leprechauns are psychic.
He read the letter over my shoulder and then hopped down to examine the package. 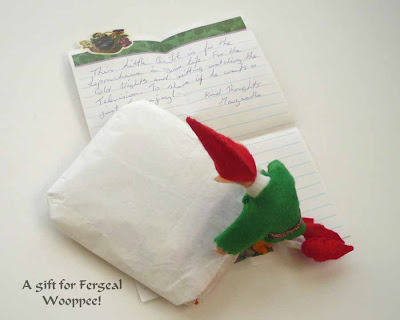 The letter read...
This little quilt is for the leprechaun in your life.
For the cold nights and  sitting watching the television.
To share if he wants or just to enjoy!
He had it opened in an instant, he laid it out on the floor and popped under it.
Isn't it just gorgeous. he wants to say a big thanks to TypsTatting. 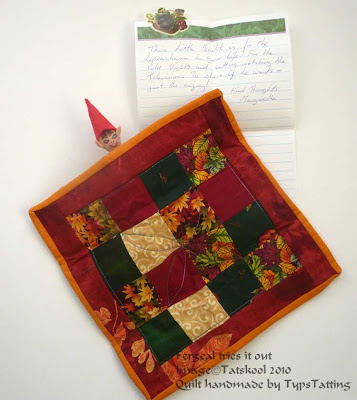 A couple of little voices were heard to say.....
did we hear that something was to share...
And before you could say leprechauns knees, they were under the quilt too. 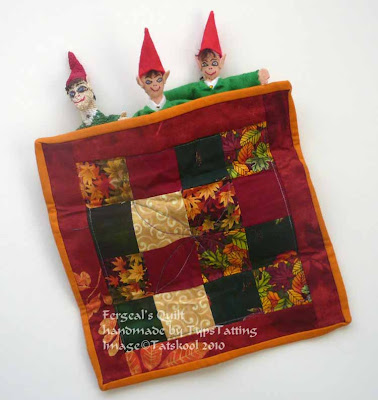 talk about cozy!
And then....
He had another idea....
Lets try it over our knees sitting on the sofa..like Typs Tatting meant. 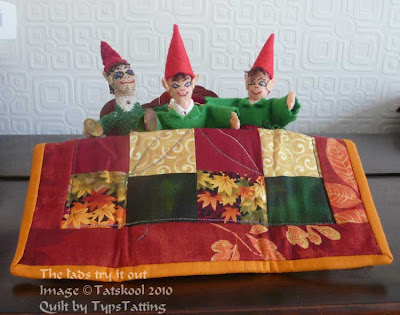 And then he had an even better idea....
Instead of getting under it, let's get on top of it..
it would make a wonderful carpet! and make my little space so cosy. 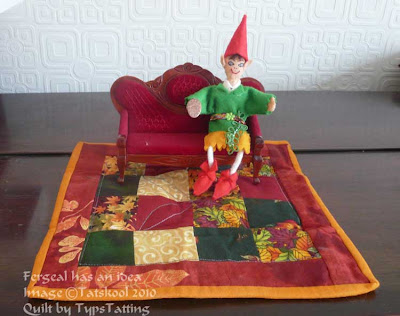 Just look how the colours match my sofa, he said, she must have seen my sofa before!
And so that was his decision, he called the lads to bring some more chairs and a tea table and some tea,
and they did. They all sat down to enjoy Tatting Tea Tuesday, Tadgh was all ready to pour the tea from Fergeal's BEST teapot. 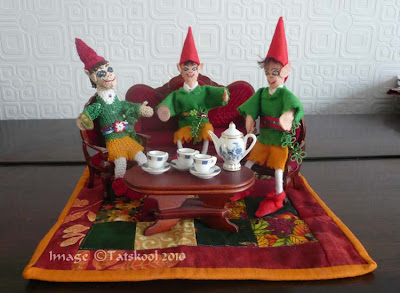 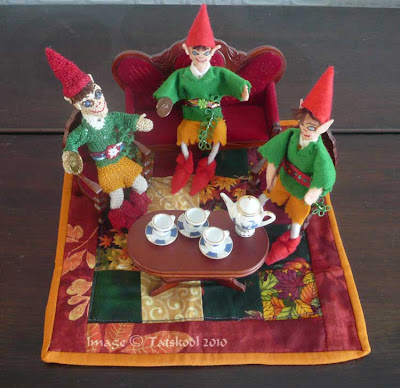 isn't that just perfect for a leprechaun party.
But
along came my friend Jackie
with her tea service!! 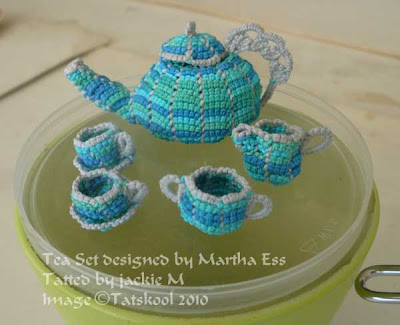 Isn't that just something. It's from Martha Ess's Teapot book, she is just such a clever designer...and Jackie is such a clever tatter.
The set is sitting on the top of my coffee cup. 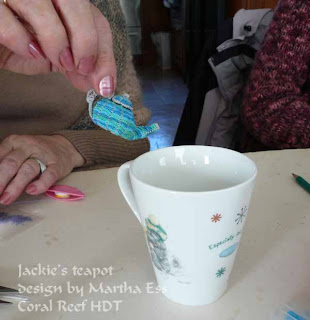 Well the lads heard about it and in an instant they had cleared Fergeal's tea set off the table onto the floor and demanded to have Jackie's one instead! 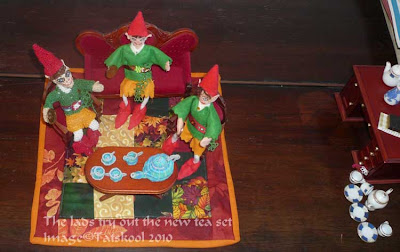 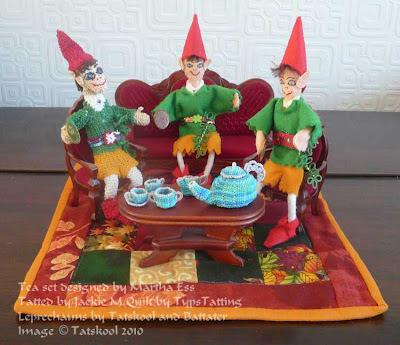 The lads were over the moon....but it is tatted in my Coral Reef HDT and Fergeal says that it just doesn't go with his decor!!
Now he wants me to make one to suit his colour scheme....any ideas....not that he is going to get one anytime soon!
The three lads think that their life is going very smoothly at the moment and wish to continue to be kept in the manner that they have become accustomed to!
HUH!
As for me, I finally completed my 7th TAT excercise  on my 4th attempt and even that one has one ring slightly bigger than the others....I just know they will spot that and knock a mark off... drat. My 3rd attempt was perfect apart from a  mistake of monstrous proportions. I just can't do it again.
5 more projects to go.
So no tatting of mine to show you today.