Long post..you might need a cup of tea.
Anyone who is living with a leprechaun will by now know just how nosy they are! They just can't be happy where they are, they just have to go snooping around.
BUT
If you live with 3 leprechauns, then you are really in for it.
They are trouble on 2 legs..or 6 in this case!
No where in my house is sacred, not a box nor a cubby hole.....and so this is how they came across my 'ladies'.
Mostly they live in shoebox except for a few that live in my display cabinet amongst the china. I suppose that's a shame!
The first thing that I knew about this was when I came into my study and there was Fergeal on top of my piano in his 'area' doing interviews again! 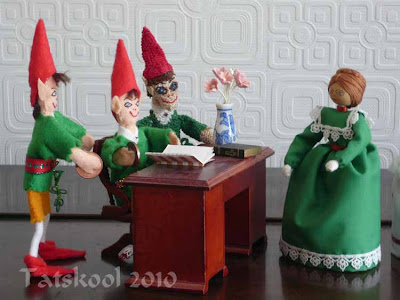 Looks like there was only one applicant for the job doesn't it??
But don't be fooled.... 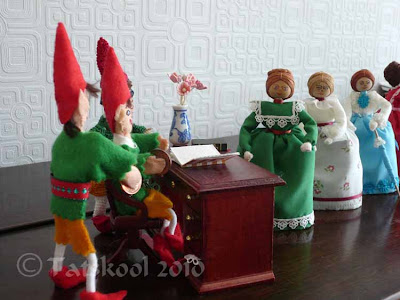 He took sooooh long and asked so many questions, with Tadgh and Nollaig chipping in all the time, that pretty soon the ladies at the back of the queue were chatting amongst themselves...as ladies do!

I knew that would like to have a closer look at them so I asked them if they would mind posing for some photos.... 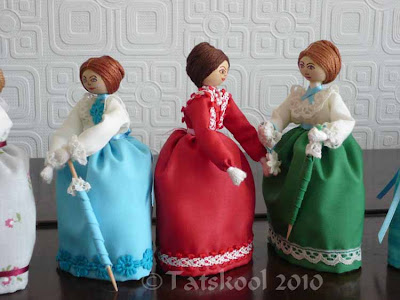 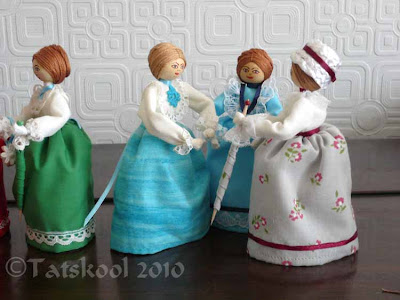 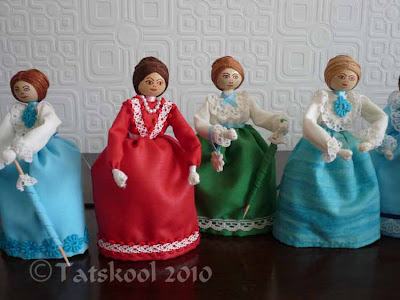 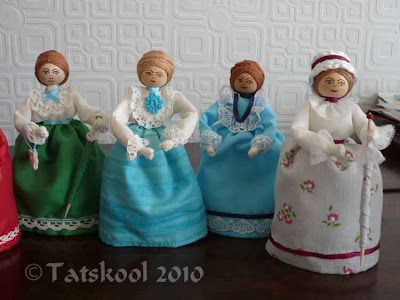 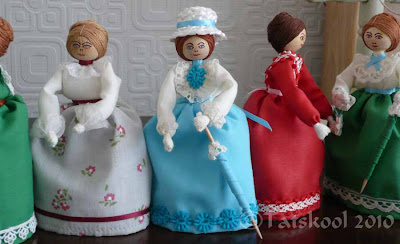 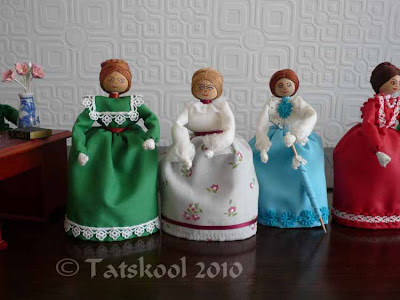 .....it's hard to believe that I actually made them......seems like a hundred years ago.
The framework is pipe-cleaners encased in cotton finger bandage, that you can buy on a roll.
The heads are wooden beads.  Getting a nice looking face is the most difficult bit, you need a very steady hand.
The hair is made from embroidery thread twisted into a coil or plaited and then coiled round the head.
Those were the days of fiddle faddle! Now wouldn't they be lovely with tatted trims. 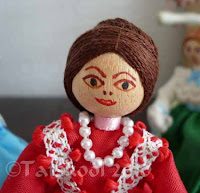 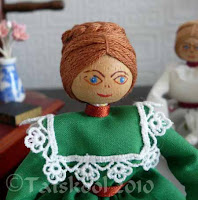 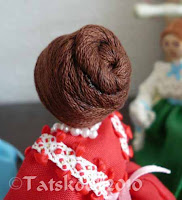 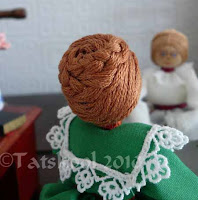 Fergeal tells me that they are 12th Scale dolls dressed in the Edwardian style.....now how would he know!!
He says that he studied the History of fashion in the Lep Academy!...the stuff that he learned and he was only there for a week...well in our time that is!!
I know that you are dying to know what the are wearing under their dresses!!
One of them agreed to lift up her skirt to show you... but she wasn't all that keen when I lifted up her petticoat to show you her pantaloons. they never bother with shoes round the house, nobody sees! 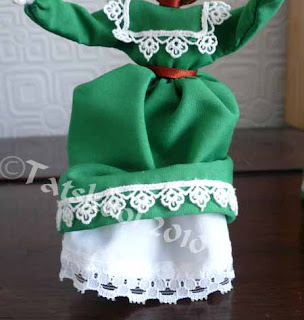 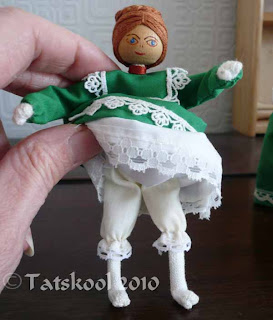 The little hats are made from plaited plasticy twine stuff from Fiji...they make mock grass skirts out of it...but that's another story! 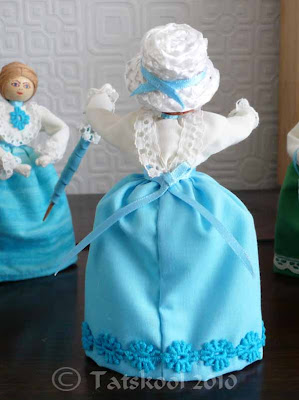 Of course I have digressed away from the most important thing......and that is....
Why is Fergeal interviewing them and what is the job he is offering !!!

He says that since the other two arrived his job has got so much harder, not only does he have to look after me and the house and the tatting supplies...but he has to look after them as well and keep them out of trouble....and then he says there are the lists.....he just can't keep up with it all.

So he says that he needs a NDPA!!!

What's that I ask innocently....he gives me that withering look...
a Non Digital Personal Assistant of course he says.
he insists that he doesn't want a computer (phew!) and tells me to get real!
He reckons that I live in a virtual world and that's not good, i should get back to reality and the simple things (like him!!)

He reckons that these Edwardian ladies should be well used to making lists....and he likes them because they are just his height......mmmmm and I have to ask my self why they are so gullible!

I can't help thinking that he is up to something!!!

So the thing is which one of them got the job...any ideas? I don't even know their names. Just hoping that they don't need a NDPA each!

If you enjoyed this post do leave a comment.....it took ages to write.
Posted by Tatskool at 5:36 pm