Did you guess what I was making???????????????
Well
My DIL to be sorted out what she wanted to be given to all the wedding guests as 'favours'....and so I was most surprised when my son asked me....
Would I make bookmarks like I did for his sisters wedding?
Wowee! he likes his mother's tatting so much .

Well it seems that flattery will get him anywhere!
What would you have said!!!
OK so let's go back in time 4 years to her wedding time.
My very good friend Jane Eborall had told me that she had made intertwined hearts for her daughter's wedding and sent me her design...and even offered to help me make them. (Which she did!)
What more can you ask of a friend.
An unbelievable number of hearts later and a lot of printing, stamping, cutting and glueing and I had about 130 beautiful bookmarks made and put into plastic sleeves.
They even did double duty as place cards as I had the names printed sideways on the reverse.
Cool or what!
I was so proud of these.

Her theme was Burgundy and Fuchsias.
It was a good job that I had made extras to keep as after the meal her day andIi got up for a photo shoot....when we got back our bookmarks and wedding souvenir CD's had been cleared away and put into the bin! and were never seen again.


This time the theme is Teal and Music.
80 + bookmarks to make
what have I let myself in for!
First job was to dye some thread to match the colour of the Bridesmaid's dresses.
Being a thread dyer of course I wanted a variegated thread. 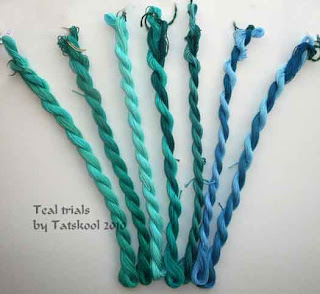 It took oh! so many trails, I had to keep going darker, darker, bluer, greener!!
I had a tiny tiny piece of material to match...a very dark teal blue.
Finally I arrived at two threads that I really liked...a green teal and a blue teal. Neither of which were like the sample of material.....but this wedding is going to have a lot of dfferent teals anyway.


What the heck I thought, the bookmarks don't have to be all the same!
This is a 'Hope' butterfly by Sherry Pence in my teal green that I never showed you. It's one of my favourites. 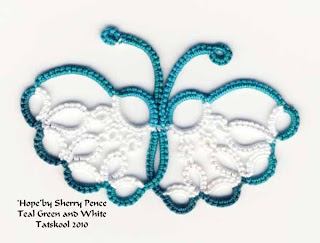 These are the two threads and my favourite Hearts Desire by Susan Fuller. 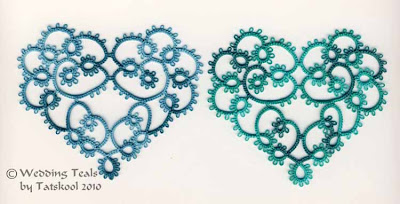 Impossible to show you the true colours.
I did end up with a third variation ...a beautiful Turquoise Teal...when the green washed right out of the thread I had had the dye made up so long with all the trials!!
I was so taken aback....beautiful but unrepeatable...easily that is.
I had offers to tat hearts for me from Suneeti and Isdihara and they worked like trojans.
We tatted over 170 hearts between us.
The next thing to think about was what to put at the bottom of the bookmark with a music theme.
I was just about to buy a music rubber stamp when Sherry Pence showed her Treble Clef design.
Woopeee! How cool....
BUT
I didn't really think that I would have time or the stamina! to tat 80+ treble clefs.... 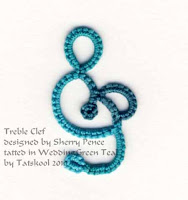 My trojan tatters rose to the challenge and were joined by Fox and my tat lassies here.....
and so a sample was sent to the bride...
and she liked it!

During our tatting, one of my friends came up with a modified version using chains instead of the folded ring. We couldn't decide if the chain should run down the back of the clef or in front so we I ended up with a huge variety of clefs using Sherry's original and Jackie's version.

I hope that Sherry doesn't mind us modifying her design.... I really don't like messing with someone else's design.
Tomorrow....I really can't put it off any longer I must see if I have enough!!
See you then!
Posted by Tatskool at 6:26 pm