Tatted Easter Eggs by Kirsten Wind Hansen
Number 12 has  bugged me for some time!
It wasn't the tatting that was the problem
it was finishing off the egg with a final round of crochet.
It's not even that I don't know how to crochet, I haven't done it for a long time,but I was sure I wouldn't have forgotten the basics.
I guess it was just that the instructions didn't make a lot of sense to me, even tho' they were perfectly correct.
I intended to scan the first round of the egg with it's fringe of picots round the edge...looked pretty.
I had measured the picots with a picot gauge to get this fringe even enough to crochet round. I used 9mm measured horizontally.
But I forgot!
When I saw that Barbara Gordon has succeeded then I was eager to pick up my discarded egg again!
My problem begins with.....do I need to use a extra thread to crochet with or is it really as simple as Kirsten says.....
well yes it seemed that it really was that simple....
so my next problem was...what do I do when I get to the end and have a final loop on my crochet hook????
anyone got the answer????
My final loop actually is just lying there not attached and not sew in and it hasn't come undone.....but that's not really good enough.
I contemplate putting in a magic thread to pull it thro'...but that wouldn't work with a loop!
Do I have to sew it in with matching fine thread.
Anyway at the moment I am not feeling like making another one!
Does look pretty tho'! 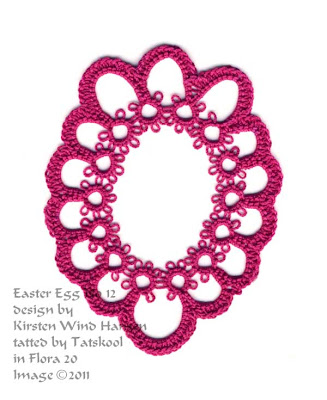