TIAS 4 cool or what!

Like so many others I have been eagerly following Sherry Pence's TIAS 4.

TIAS Tat It And See is a wonderful, wonderful invention by Jane Eborall.
The design is posted in little bite size pieces that each in itself is not too challenging, but if it was seen as a whole many tatters would look at it in horror as way too difficult even to attempt.

Sherry's TIAS was a huge tease right to it's final stages. She gave us very strange little bits of block tatting which built up into even stranger bits. I thought that maybe it was going to be a bed, then a little house. I was a little slow to get going on this one and always struggling to catch up. Many many blogs had to go unread for days as I was afraid that they were going to show bits that I hadn't yet got to.

When I finally got bitten by the bug of what the heck is this going to be I had to catch up quickly. But it wasn't until I was part way through days 10 and 11, yup at the same time, that I actually took time to lay it out beside me one on top of the other and say to hubby " I haven't the faintest idea what this is going to be....oh my goodness it's a LIGHTHOUSE!!!" all in one breath!

Of course we couldn't just let it be A lighthouse we felt that it must be a particular lighthouse as the pitched roof above the lower door was not familiar to us on a lighthouse.

Hubby thought he remembered a famous lighthouse that may be like that, then he narrowed his search to New England and before we went to bed that night he had shouted "eureka this is it"...or something along those lines.
Oh my isn't the internet wonderful, what did we do before we had it...I suppose go to all those books we have, but they wouldn't have come up with Great Point Light Nantucket.

Courtesy of Wikepedia here she is 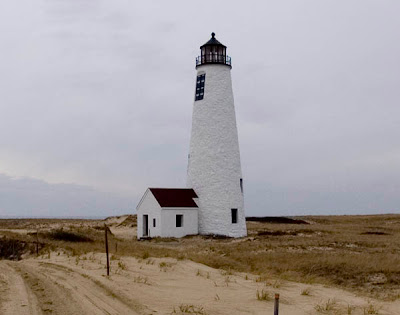 Wikepedia says .........also called Nantucket (Great Point) Light is a lighthouse located on the northernmost point of Nantucket Island. First built in 1784, the original wooden tower was destroyed by fire in 1816. The following year a stone tower was erected which stood until toppled in a storm in March 1984. Rebuilt again in 1986, the stone tower was built to replicate the old one, and still remains in operation today. Modern additions include solar panels to recharge the light's batteries, and a sheet pile foundation and 5-foot thick concrete mat to help withstand erosion.

The lighthouse sits on a thin spit of beach where the currents of the Atlantic Ocean and Nantucket Sound meet.

I couldn't find a single picture of her from the front.

Here is MY Great Point Light 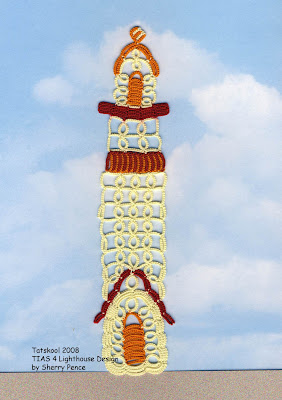 Now isn't she a dead ringer for Great Point Light. I even like the colours that i chose. One thing that had puzzled me was the two colour block tatting panel....but doesn't it just have to be the block of solar panels????

Sherry says that hers is not modelled on any particular lighthouse, and that she lived in Oregan and loves lighthouses. So I had to look up Oregan lighthouses and sure enough there are some with the porch entrance but I don't know about those solar panels!

This lighthouse is a work of art, I particularly like the way she has made the brickwork for the body of the lighthouse walls, and the way the entrance has a solid 3D quality to it.

I am still sticking to Great Point Light and I am going to treasure it. Thank you so much Sherry.
Posted by Tatskool at 11:50 am