Not my lucky day!

Remember I told you only yesterday, how atrocious our weather has been...and is!

Last night was awful....sheeting rain and blowing a gale....and it has continued all day with no let up.

Just before lunchtime while I was busy making leprechauns to placate Fergeal and listening to my iTunes....there must have been an enormous crash....as my display stand for my little trees collapsed! 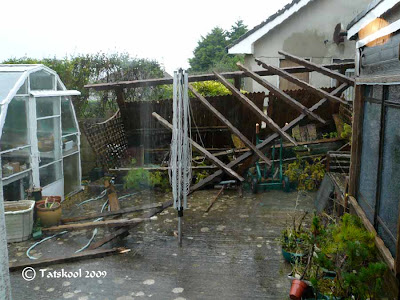 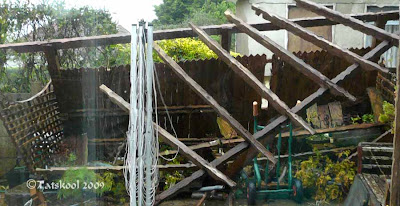 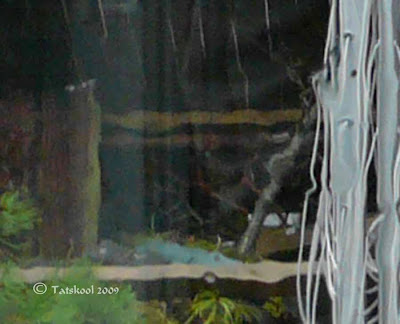 These photos were taken through the window.....I was gutted.
We had replaced all the slats on the tables only a year or so ago and had just decided that we needed to replace the whole frame. Trying to remember how long it was since hubby made it for me...I found my photos of it's official opening.... 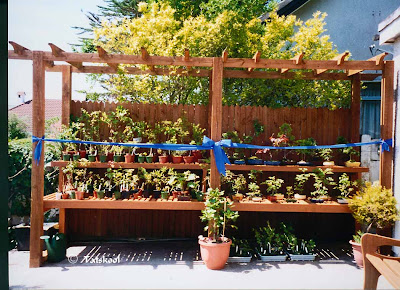 I started keeping and training these little trees in 1990 after a friend gave us a bag of acorns!.......Great things from little acorns grow.
They are mostly from seedlings dug up from the garden....and from garden centers.......nothing of any value...except to me. In 1990 they were nearly all in flower pots they were so small and new. Anything that didn't move I dug up and put in a pot!

My stash of pots almost exceeds my thread stash! The trees that I favoured tended to get bigger over the years...mainly because they are easier to look after.

2002 and they were looking their best....before tatting and thread dyeing reared their ugly heads. I had been suffering from a very bad neck for several years which had put an end to my craft passion...so the little trees filled the craft gap. 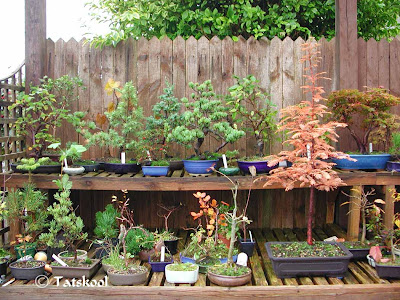 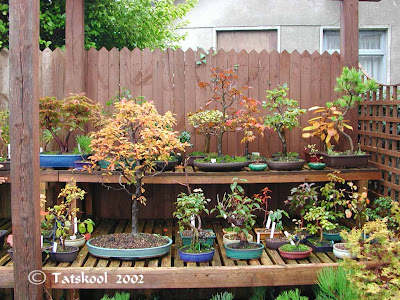 OK see the pale turquoisey blue pot on the bottom table, isn't that stunning...at it's very best before my son forgot to water it while we were away one time and it lost a lot of it's branches..... 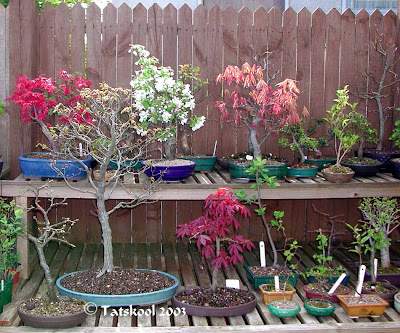 ......here it is again in spring 2003 together with my apple (of Apple Blossom fame)and my Japanese maples.

Now can you imagine my horror when I saw what had happened!!!!!

We decided that it called for drastic measures and rescue before it got even worse.....so we donned our waterproofs...... 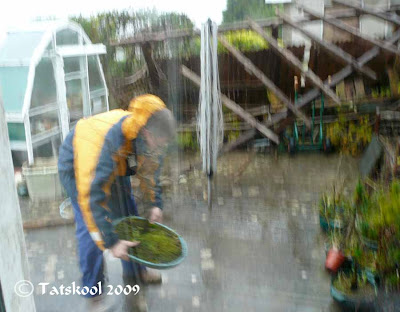 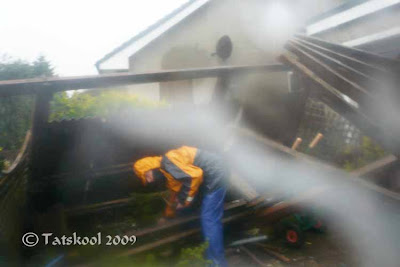 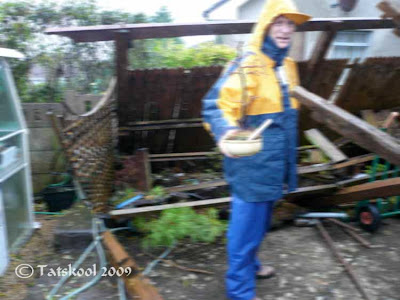 One by one they were taken out and handed to me...but that was the one sheltered spot in the garden! so now they face the wind and rain again.
OK I know it's not a real catastrophe but it felt like it to me!

You will be amazed to know that only about 5 pots got broken and all the trees look ok but time will tell.
Posted by Tatskool at 5:40 pm