Story of the Rainbow Snowflake and the Starfish

Way back in May I was supervising a really boring exam....boring in that it really couldn't take a lot of walking up and down.During these exams sitting down, it is often hard to stay awake and especially to keep my eyes open. I need something to stimulate my brain into active thought.
So I was flipping through Elgiva Nichols-Tatting Techniques book, looking I guess for inspiration.
I got as far as page 31 with the rings and chains motif that she describes as a Scroll. I was taken by the effect of the inward facing chain and outward facing rings. I started to doodle what it might become.

Now anybody who know me knows that I am not original, I find it very hard to design....anything! Maybe I don't try hard enough or maybe it's because there are so many patterns out there that I want to make. I have only two original patterns to my name and they can be found on my website. Unlike so many of you, my head is not buzzing with designs all trying to get out. But it is full of the desire to make things and to make them to the best of my ability....and it always has been.

Well, after a lot of attempts I had a workable, I thought, 6 point snowflake that didn't remind me of anything that I had ever seen before. It did somewhat resemble a starfish with its long unadorned arms and also reminded me somewhat of the 3 legged Isle of Man logo. It looked like it was going to tumble head over heels so I called it Tumbling Snowflake.....

and forgot about it!

Six months latter while looking for something to tat that was my own and could be used to show of my Rainbow Bright thread I came across my design.....

I got the stitch count right at my first attempt with just a tiny trial in white and then plunged in with Rainbow Bright as I was itching to see what it was going to look like.

Oh! I loved it from the very first stitch.

Showed it to hubby and he said that it didn’t look like a snowflake but a Starfish…….well he would think that wouldn’t he!!....... 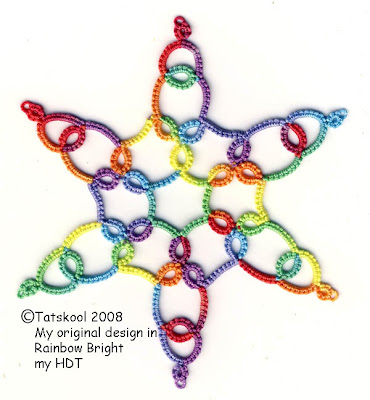 and so my starfish was torn assunder…....well figuratively speaking! one half went to make a new Snowflake and the other a Starfish!!

The inward facing curve following the central inward curve, that I really, really liked was replaced by an outward facing curve making it more snowflake than starfish.
The tips of the arms lost the little ring and gained 4 beads. 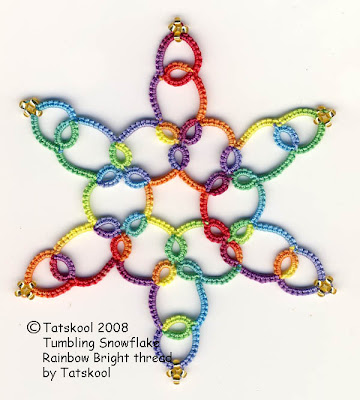 Oh my!! I LOVE IT!! If you could only see how those gold beads sparkle.
I really like the way that it shows off Rainbow Bright.... I know that I could have added frilly picots but I like it's simplicity. I know that it looks simple, basic and straightforward but I LOVE IT and honestly haven't been able to find a snowflake like it on the net or in my collection of books. It came totally out of my head after the initial stimulus of the inner circle from Elgiva Nicolls...but I know that doesn't make it mine if someone claims that they have designed it before.

Look at it on a black background...... I like the effect of all the circles that the chains make. 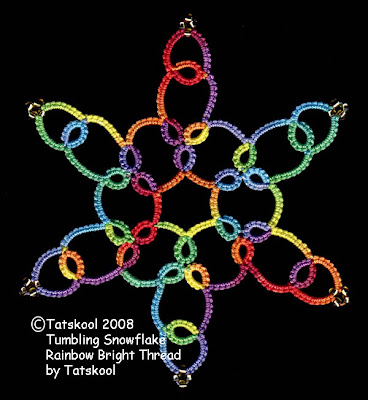 Well he keeps the inward facing chains because that what makes him a starfish. But he loses an arm…......ouch!! The arms are made more pointy by using the shoelace trick recommended by Jon Yusoff. 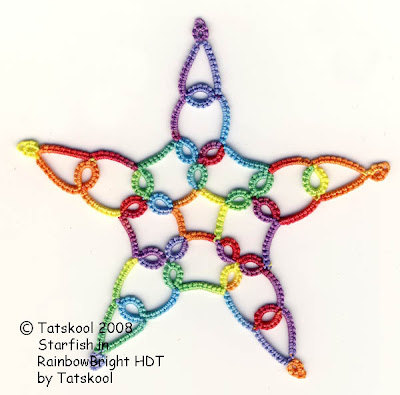 On black background he is a wow! 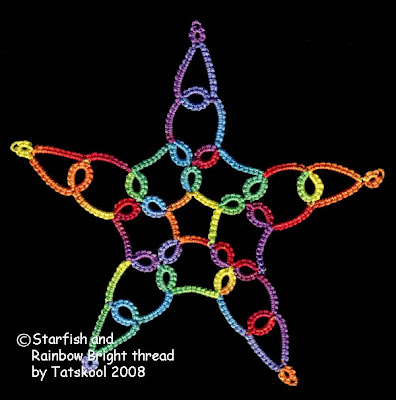 But what kind of starfish is he…….Linkia suggests hubby ...…we look it up…it’s a beautiful cobalt blue…but its arms are really rather too long in proportion to my central disc.

Now I know some people are going to say that it doesn't matter what kind of starfish it is...but I am a Zoologist and to create something that actually looks like a named animal is the cream on the cake to me. 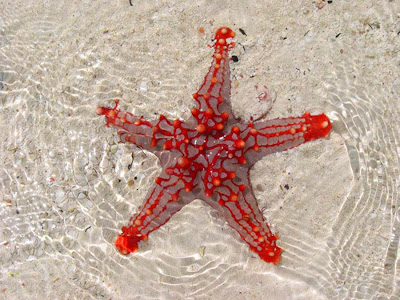 I am sorry that I couldn't contact the owner of this photograph so I hope that they won't mind my using it. 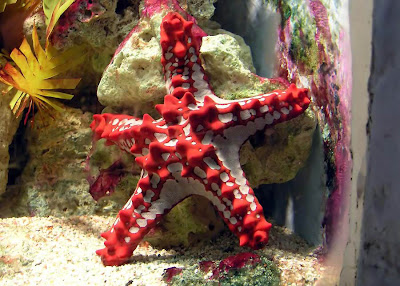 This photo is copyright free....

Red-knobbed Starfish Protoreaster linckii at Bristol Zoo Aquarium, Bristol, England.
It looks as though I’ve propped this animal at the best photographic angle, in fact it was like this when I approached the tank (to my delight!).

Photographed by Adrian Pingstone in December 2005 and released to the public domain.

So made it in red and cream then changed the outer ring to a Josephine ring a la method of Jane Eborall and am happy with it. 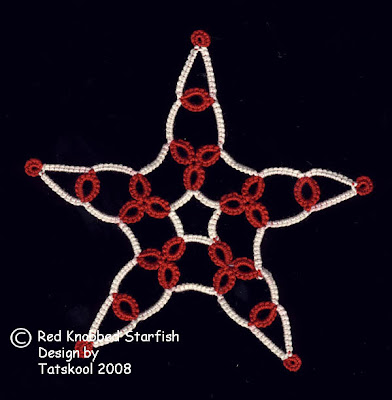 It looks so different when made in 2 colours.
But with beads it is GORGEOUS and so Starfish like...I am amazed! With a little bit of computer jiggery pokery he really looks like he is on sand in a rock pool...well he does to me!! 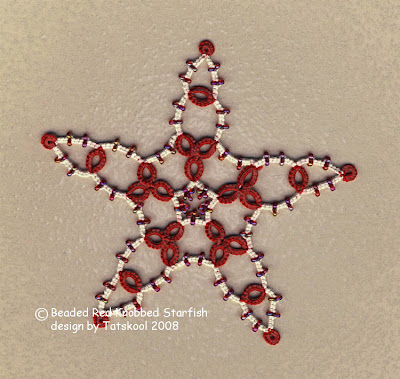 Pile 3 on top of each other, a little computer colour change and I have a multi armed starfish reminiscent of the Crown of Thorns starfish, such a nuisance on so many coral reefs. 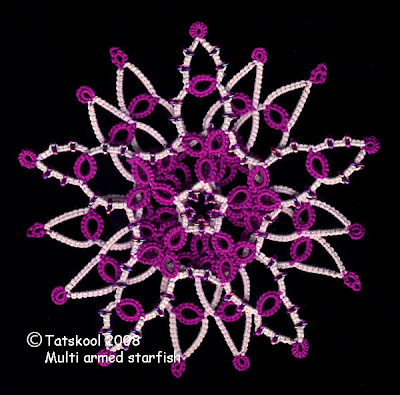 If nobody claims these pattern as theirs I will post them on on my website as my Christmas present to you all. So far the gurus that I sent the pattern to don't recognise it but that means nothing...if I am stepping on anyones toes, I humbly apologise.
Posted by Tatskool at 3:48 pm