The second design the the book Tatted Easter Eggs by Kirsten Wind Hansen is very much like the first one.The difference being the addition of an extra ring at the base of the egg and josephine knots all around the edge.
Great practise doing josephine knots. I prefer to use the second half stitch for these and to pass the shuttle around the thread after every  five half knots.
First trial looks like this .... 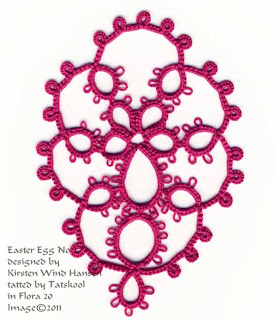 I must admit that the additional ring at the bottom really foxed me! Try as I might to remember to make it after I had tatted the one above  I forgot and on the second attempt I still forgot! So the ring is stitched on with fine thread.
For my second one I was dying to use my new batch of Raspberry Ripple with Vanilla... 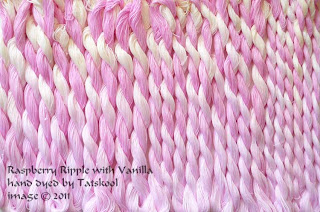 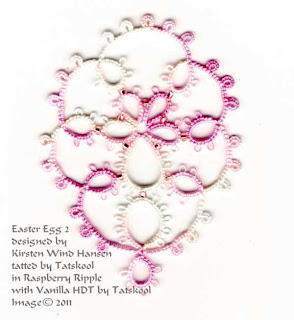 This one does look prettier in real life....hard to capture. this one is tatted in size 30.
I did stiffen and shape these... 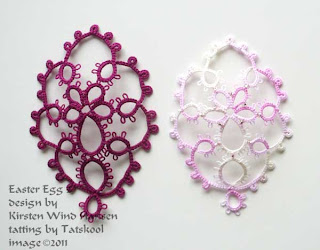 This shows the colours much better.
Thank you so much to those who took the trouble to give their opinion on whether to shape the eggs or not. I tend to agree that they would look better flat hanging on the tree and have flattened my no 1 eggs.
Funnily enough when I asked my tatting lassies for their opinion every one said 'shape them' and are going to shape theirs.
In size 20 they take about 3.75m on each shuttle.
Posted by Tatskool at 3:19 pm