Tatted Easter Eggs by Kirsten Wind Hansen
I must admit that when I first got this book I was not all that struck by it. A lot of patterns looked much the same as a lot of other motifs only blocked to be egg shaped!
But once I got into tatting the patterns numerically instead of cherry picking my favourites, they began to grow on me and I wanted to give it a fair go! I won't have time to tat every design several times as I would like to, but I will tat as many variations as time allows.
I hope it won't be quantity rather than quality!
No 5 looks pretty ordinary until I began to tat it and then its beauty hit me.
Even my trial is lovely. 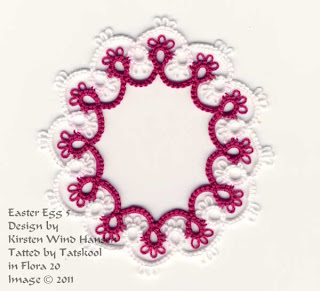 I should have scanned this against a black background before I stiffened and shaped it.
I suppressed the desire to take it in reverse to see what it would look like!
Mmmmm! I thought what about making this look like an egg with the yolk in the center and the white on the outside. 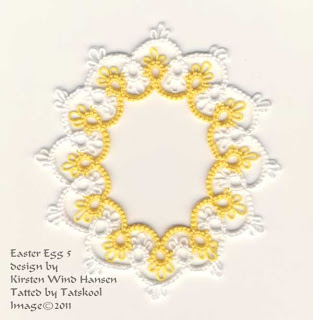 I made the picots graduated to make the white a bit more fluffy.
But it's not egg like enough....thought process gets going....why not give it and eggshell.
Cool idea...so I got out an egg and compared it to my new selection of browns in my Gingerbread range.......and Cinnamon won.
Added some beads to fill in the yolky center a little.
Changed the stitch count of the yolk quite by accident...wondered why it had little peaks in the middle and added an outer round of cinnamon chains.
Now I need to know what it would have looked like if I had tatted the correct/original stitch count! 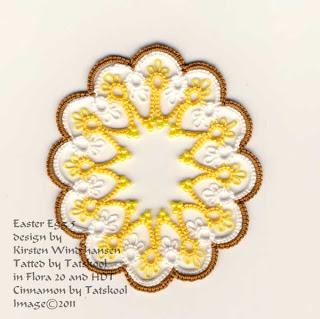 It looks so like a cream Easter Egg
I LOVE THIS BOOK!
This design has so much more potential to explore.
The outer round of chains finishes it off to perfection.
Stiffened and shaped....but not the third one 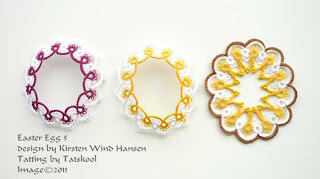 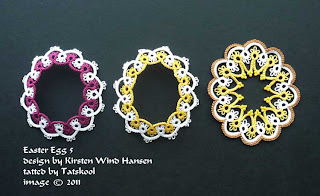 As as addendum to this....my lassies were tatting this design (from their books) when two of them shrieked
'Oh No'
They had both joined the rings together in the inner round. One of them hadn't got very far, the other had several rings made and was blowed if she was going to untat!
We told her that it wasn't a mistake, rather a new pattern!
She went home having got this far... 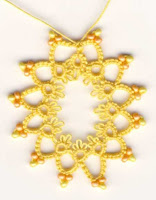 .......and returned two weeks later with this little beauty. 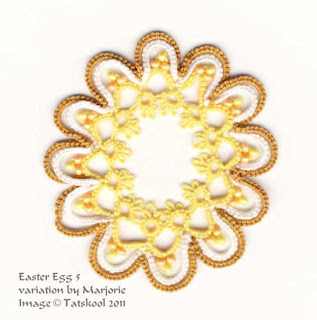 Isn't that lovely and the mix of yellow and orange beads is beautiful.
the little Easter chicks were impressed too. 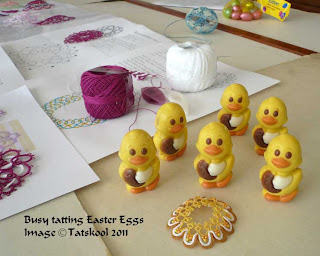