Glad that so many of you enjoyed Fergeal's exploits....it you enjoyed it do please leave a comment...they do show me that my efforts haven't just disappeared into cyber space.
Only one guess as to which day of the week he held his interviews!!
There will more adventures of Fergeal to come as he is getting big ideas above his station now that he has his office.

This is the second of the snowflakes from hell that I was dreading. Sorry Lene...all your designs are superb.

The finished snowflake is beautiful. 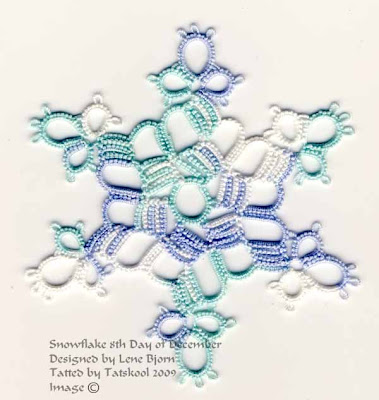 But it had major trials and tribulations.

I began with a solid colour in Flora 20....loaded up a shuttle connected to the ball.The instructions tell me that it is made in two rounds continuously...and I understand what she means...miraculously! I am told where to start and given direction arrows and further instructions.... so all should go well!!

But it didn't... I chose to do Jane's method of block tatting..that is one row of flipped stitches, followed by one row of unflipped stitches. Very easy once you get the hang of it and so turning at the end of a row. Jane has just reminded me that Julie Patterson used this method first, though Jane arrived at it independently.

All went well until I suddenly realised that I had joined in the wrong place! Way to far back to unpick...and so I abandoned it...and learned! 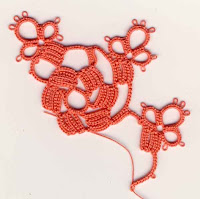 I do have one complaint about the presentation tho'! The photo is the reverse of the diagram...making it very difficult to compare where you are, especially when you are right left challenged. This wouldn't normally be an issue as most designs are symmetrical, but block tatting is not!
So I had to flip it and print it out...big!

I also learned something else...NEVER, EVER try to do block tatting with a soft thread like Altin Basak. In block tatting there is a lot of joining thro' tiny spaces and inevitably the thread gets split at some point. With 6 cord thread you can usually smooth it back into a useable state, but with this the soft single pulled thread broke and became a lump of fluff!! Twice I had to join in a new thread next to the fluff....bet you can't spot it tho'!!

I would tat this pattern again. I can think of so many threads that it would look pretty in. Using the shoelace trick method, the colouring in the block tatting would be continuous. Jane/Julie's method and switching shuttles method both produce contrasting stripes.

I promised to show you what I bought in the Big Smoke on wednesday. This was my best find, something I had been looking for for ages...and there it was in a sale, half price!

It's a tree about 18ins high, made out of silvery wire with crystals on each branch.
Even tho' the crystals are made of plastic they really sparkle. It's a good job they are not swarovski as they are destined to be taken off! 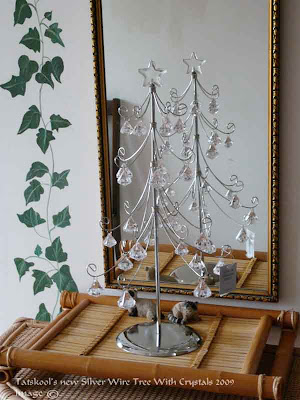 I put it in my hallway against a mirror so I will get to see two lots of tatting. I can see this with hearts or easter eggs too.

You can't see it very well in this photo so I have put a piece of card behind it. 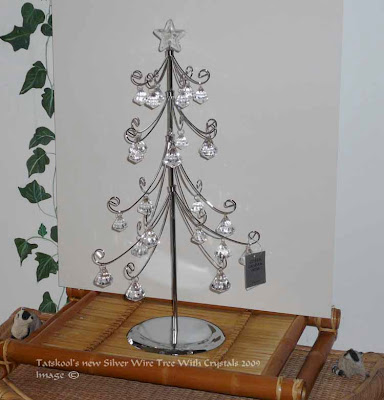 See ya tomorrow!
Addendum...this is the same Altin Basak thread that I used for the first snowflake of 3rd December that I sent to Diane. Pretty colour.
Posted by Tatskool at 5:59 pm