I guess that the one most of you were interested in was THE GIRL!

Well she landed safely in Idaho into the welcoming hands of Lady Shuttle Maker. You can see them here. They look so alike it's hard to see which is the leprechaun! I think they are going to influence each other a lot.

I wasn't going to show Fergeal that blog post 'cos I know that he liked her...a lot. He tried to get her to stay, but she said "No! I want to travel while I am young enough and have no ties!" I think that I have heard that somewhere before!

We all hope that there will not be a repeat of last year when Brendan decided that he hadn't travelled far enough! and wandered off.
I can assure you (fingers crossed) that she is Brenda the stay at home..the homemaker. Blathnaid (Blon-ned...in Irish names you always lean on the first syllable) means flower...so we should be seeing flowery designs and HDT's in abundance from LSM.

Well back to this post, when I went to get a cup of coffee, Fergeal spotted the open window on my computer from his office on top of my piano..dragged up his tin of Chocolate Leprechauns to climb on for a better look. 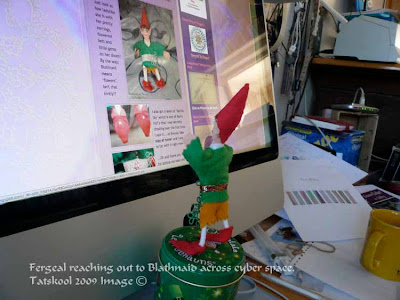 I left him there while I got my lunch ready, when I came back I was gobsmacked to see that where I left one, now there were two leprechauns admiring the photo and not only that but Fergeal had managed to enlarge it so much that she was almost in the room with us.

In the blink of an eye Fergeal had lifted the other one on to his shoulders to get a better view. 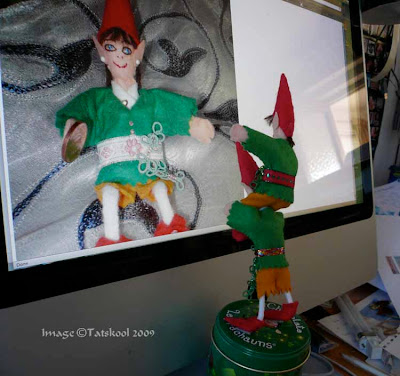 "What's going on here?" I asked rather feebly, 'What's he doing still here??"

Fergeal wheeled round taken very much by suprise.... 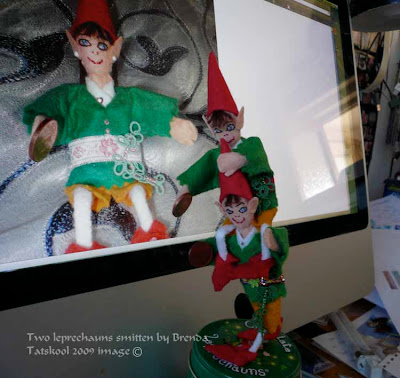 Seems that our Fergeal is lonely. He has seen three lots of leprechauns....just like him...well almost...arrive and then be sent away before he had chance to get to know them. "It's just not fair." he said.

Then he began to try to justify his actions. he reckoned that as he was in charge this year and did all the advertising and all the interviews, that his workload had got so much bigger than stated in his contract.....so he decided that he was in need of an assistant.....and had talked young Tadgh into staying....promising him...well who knows what he has promised him!!

I think we are going to here a lot more from him....as he and Fergeal are always together dreaming up some big scheme.

In case you didn't know Tadgh is the Irish equivalent of Tim...it is pronounced Tie-gg. Don't forget to lean on the first syllable.

Next time we write we will show you some more photos of Fergeal and Tadgh and some never seen before...photos of Blathnaid AKA Brenda before she left.

Oh the number of Leprechauns that are writing in saying they are smitten by Blathnaid is growing by the minute, whatever will happen next!

Normal snowflake challenge service will be resumed tomorrow.....OK so I am just playing for more time!!!
Posted by Tatskool at 6:10 pm