Christmas eve. The Santa hats were laid out under the tree, mince pie and a glass of milk for Santa (mustn't turn him into an alcoholic!). The tree twinkled in a way that made my eyes keep turning to look. 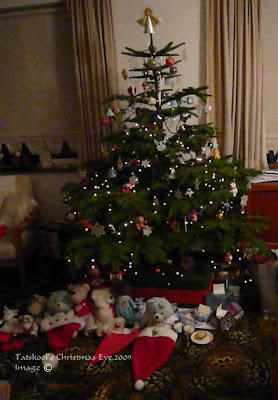 Christmas morning the hats were full of chocolates and chocolate money....yipee santa never lets us down...you would think we had small children in the house....instead of thirty something children... We hope that we never grow up and lose the magic.

We all got the most delightful gifts, DIL to be is busy at the moment making sparkly french knit necklaces from the ribbons that I gave her. DH got the ultimate coffee machine that he has spent his life looking for! Fergeal was of course jealous as that's what he had wanted for his office! and so on...

The weather was absolutely atrocious.....going from sheeting rain to hail storms until it cleared enough for us to drive to see if anyone was brave enough for the Christmas swim. We parked as near as we could and watched from the car as so many raced into the sea....and raced out again. 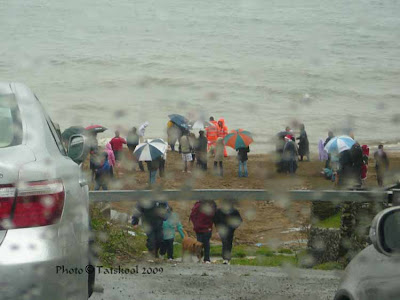 The rain poured down. 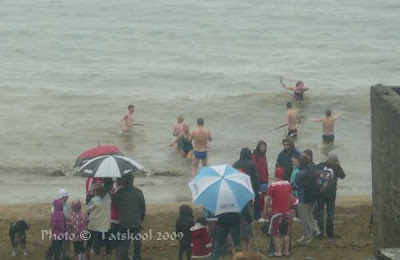 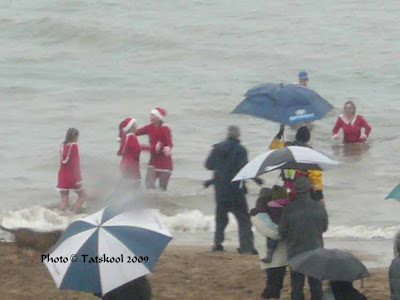 Santa's danced in the icy water. 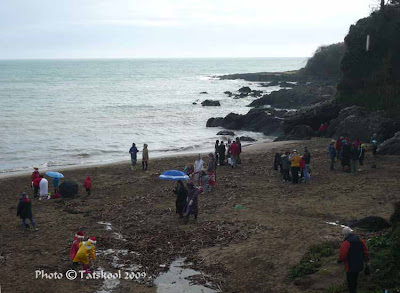 Finally son and I ventured out of the car to get a bit of exercise and fresh air as the rain had stopped for a few minutes.
Watching the Christmas swim has been our family tradition for years and years and I don't ever remember such awful weather. I suppose I just don't remember bad things.

Hope your day was as good.

Happy St Stephens day to all my friends.

I just offered my son his choice of snowflake (he loves my tatting) and his chose the Rainbow Bright one with the yellow center...I knew he would!
Posted by Tatskool at 5:20 pm