There are tatters out there who don't believe that it is really the 15th of December!!!

They may be right!

If they are then I will not have finished my 24 Snowflakes before Christmas!

But I keep going in the hope that they are wrong!!

Today has been a hectic day in my house, finishing decorating to name but one minor thing. I nearly didn't make it to my computer for this post, so think yourselves lucky!!

There are others who believe that there are tatting helpers in my house, they obviously don't know just how lazy two leprechauns egging each other on can be!!

Today's snowflake no 15 in the book was a real pain in the ....! I am beginning to see a pattern here of easy ones
to give me a feeling of false security followed by similarly easy looking ones that are NOT.

Lene's tatting is so immaculate in her photos, every picot is just so, and her chains all so even, that I am wondering how many dozens of times did she have to tat these to get a perfect one or can she do that every time!

OK enough of that, time to show what I achieved. 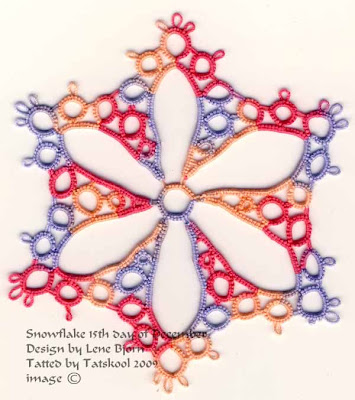 I can tell you that it looks a helluva lot better now that I have blocked it than it did before.

The tatting itself is easy. It is basically chains with rings thrown off, but it is so difficult to get those long chains to be smooth and even. Maybe practice would make perfect but no time to do that. That and getting the joining picots just the right length. Done really well it would be stunning.

The thread is another Altin Basak 50. the snowflake measures 9.5cm again.

Thread amounts Sh1 1m, Sh2 11.5m, sh2 does most of the work...or Sh1 if you don't RW when you come out of the center ring. In which case adjust thread amounts slightly.

Today's bonus snowflakes...more of my favourite Dec 3rd..this one is just so easy and so stunning.
I wanted to try it in Vanilla Sky. MY first one has a center of Raspberry Ripple and Real vanilla. 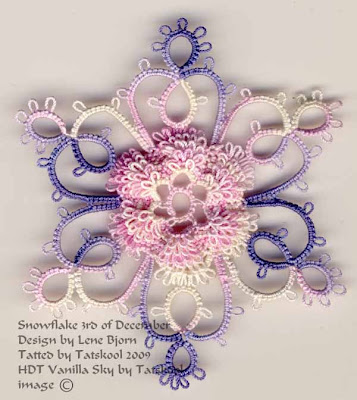 You may or may not notice a glaring mistake...but I will point it out anyway! Major forgetfulness in the big ring at the bottom of the scan. I get so used to tatting my picots in the central rosette with no stitches between them that I forgot not to!

I was too far past it to even think of untatting so I said to myself who cares anyway! It's just hand made that's all.

I don't really like the effect of the varig' center so I will use a solid colour. The choice was a pale pink from Vanilla Sky or a slightly deeper one. I chose the deeper one. 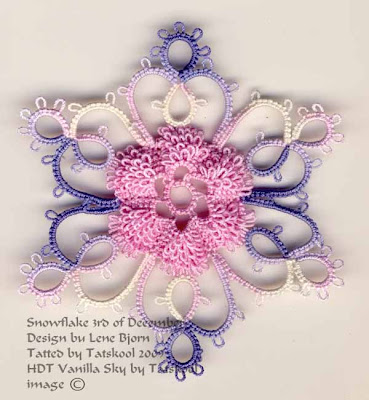 Not sure that this was the right choice, need to do another with a paler center!

On to tomorrow....still a week until Christmas!!!
Posted by Tatskool at 5:20 pm