I continue to blunder my way through my challenge, trying to tat as fast as possible....Resulting in so many mistakes which I am happy to show you, tho I would prefer perfection but that doesn't happen first time always....indeed not often!

We all have to practice, concentrate and learn.

Snowflake number 16 was no exception!
This is a very pretty easy to tat snowflake...provided that you concentrate enough!

Now of course this would have been obvious if I had been concentrating and not watching TV at the same time. The book had lulled me into a feeling of false security that all the central motifs have 5 picots and a false one.

Rather than throwing all my work away...too far to untat....I though that it would work equally well with 3 tall and 3 short trefoils......wrong again. I ended up with a 3D object..... 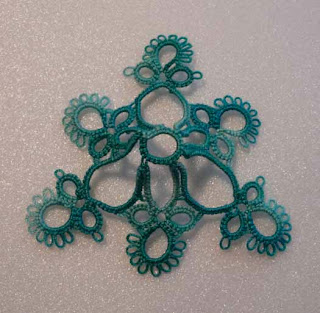 ...which actually would look great draped over a bauble....if only the central circle had been bigger.....which brings me back to the beginning again!

By this time I was heartily sick of this colour....Oren Bayen...gorgeous teal green.

A change of colour would do me good and it did. 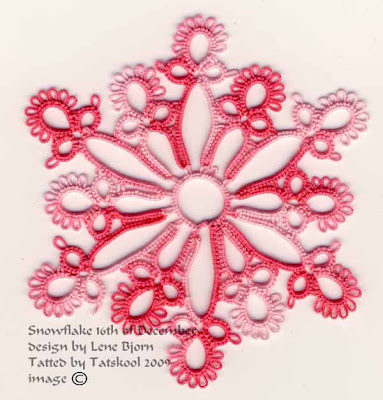 Looks beautiful doesn't it and I bet you didn't notice the mistake...yes another mistake. I ran out of picots to join to again...I was sure I had 12....if you look closely at the top right you will see the little blighter that got caught up in the previous bit of tatting.

Nothing for it but to soldier on and MAKE another picot in the last stitches. Looks ok mostly.

Thread amounts Sh1 11.5m if you don't RW after the central ring then Sh1 does all the work. Sh2 1m or less.

This really looks like the end of the challenge for a bit. Christmas really did catch up with me and the rest of the family refuse to believe that it is only the 16th and wait a bit.....probably because their flight home won't wait!!

I do have no 17 about a quarter finished but sonny boy wants to play Cluedo and Mahjong tonight and have a party of our own, since the one we normally go to is cancelled. Cluedo I will put up with, Mahjong is our all time fav' since we bought out set in HongKong a life time ago.....

Trying to catch up on all the Christmas blogs is impossible but I am trying.

See ya tomorrow.... I had hope to photograph all the 16 snowflakes together but no time. I actually tatted a total of 32 snowflakes if you count the repeats!
Posted by Tatskool at 6:53 pm