This is the last of the 'how on earth am I going to tat this one' snowflakes. That's not to say there won't be any more, but they all look do-able from this distance!

This one took me 4 nights to get right, but I got there in the end. Tatted in one round, it goes in and out, up and down and round and about until you are dizzy!! Once you have figured out which direction you are going and where to join it's a doddle!!

I did start off on my first attempt going the wrong way as I came out of the inner ring and ended up with my block tat lines lying the wrong way round...which turned out to be useless...so that was abandoned...especially after I then noticed that there were direction arrows. silly me.

Once again the photo is the reverse of the diagram which doesn't help the confusion.
Nice big print out, flipped over had to be made.

The instructions are actually good with start arrow and follow up arrows.

Loaded up with Flora 20 in a minty green off I went....at speed...too much speed not enough thinking! using Jane/Julie's method as in the last snowflake...I was half way round before I stopped to take stock and realised that....the picot shown by arrow A should have been joined to point B.....ooops! 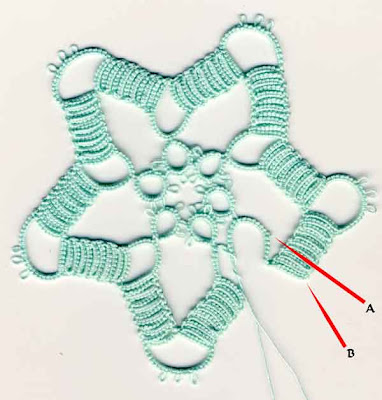 Looks simple doesn't it...just tie them together when I have finished...WRONG!! that would make one row of block tatting too many and I would end up at the outside instead of the inside!

I cut out the offending chain and the first ring, stood on my head and tatted backwards to the beginning...or something like that. I did it anyway and it don't look half bad! Well apart from that blob of 4 ends tied off that you prob can't see and I won't look at!! 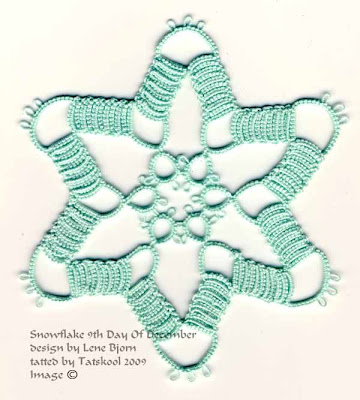 Yippeeeeeeeeee! it's finished...it was easy really on reflection! they always are..that's why I should tat it again and enjoy it this time. So what colour do you suggest.

Joy of joys, tomorrow's pattern looks easy and gorgeous.....now don't peep and it will be a suprise! See ya!
Posted by Tatskool at 4:40 pm