Only a day late so far, that's not bad!

Gosh! you really liked my Vanilla Sky and the snowflake, thanks for all the comments, very much needed encouragement.

I intended that it would be the thread that I would do all my snowflakes in this Christmas...but it took so long to get it done...and then I took on this challenge....and then I had the new batch of Rainbow Bright and the rest is history!

Here is my snowflake, the sixth one from 24 Snowflakes in Tatting by Lene Bjorn. 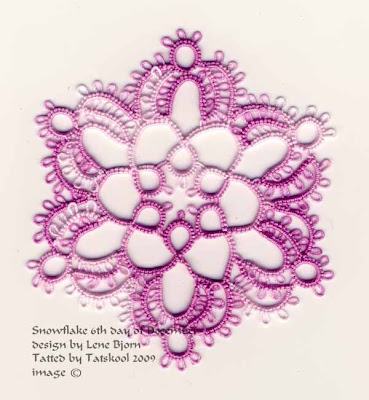 Isn't that pretty. I tried to make my picots long to make it frilly.
This was tatted in another of my Altin Basak collection, very pretty colour. Soft and gentle. I need time to repeat this one in Vanilla Sky.

The pattern was pretty easy except that I decided to make it in one continuous go and make a split chain to go from the inner ring to the outer round.
I have made so many of Jon's designs on rings from her new book...which are great practice for split chains....that I thought that it might now be easier.....and to be honest it was....but I can still see where I made the split chain.

Once again I feel that I am not afraid of it!

It would look nice in two colours but no time to do it.

My only criticism of this book....like most of the others in this series...is the insufficient amount of written instruction and often the diagrams would be easier to follow with more info on them. This pattern was ok as is is labelled with A,B,C..to help tackle to outer round.

I am now coming up to three patterns that I have not been looking forward to. I would have skipped them and gone on to the next ones that look easy.

But life can't always be easy and that is the point of this challenge...to tat them all...in order.

So look for me tomorrow to see if I have been able to do it...without exploding or imploding.
Posted by Tatskool at 5:34 pm